Hirohito[a] (裕仁?, 29 April 1901 – 7 January 1989) was the 124th Emperor of Japan according to the traditional order of succession,[2] reigning from 25 December 1926, until his death on 7 January 1989.[3] He was succeeded by his eldest son, Akihito. In Japan, reigning emperors are known simply as "the Emperor" and he is now referred to primarily by his posthumous name, Emperor Shōwa (昭和天皇?).

The name "Shōwa" was given to Hirohito after he died. Emperors of Japan are normally renamed in this way; and people started using the new name in 1990.[4] During his long reign, many people outside Japan call him Emperor Hirohito,[5] or just Hirohito.[6]

Prince Hirohito was named regent for his father in 1921. he became emperor after his father's death.[6]

Hirohito was the emperor of Japan during the Second Sino-Japanese War which became World War 2 (1931 to 1945). Though he was supposed to be an absolute monarch (an emperor who can make all the laws and rules), most of the power in the Japanese Government during this time was held by Japan's Prime Minister Hideki Tōjō and the military. His role in WW2 is controversial.

After Japan's defeat in the war, the role of emperor changed. The emperor became a symbol of the state.[6]

Hirohito was the first emperor to travel outside Japan. He visited Europe in 1971 and he traveled to the United States in 1975.[6] 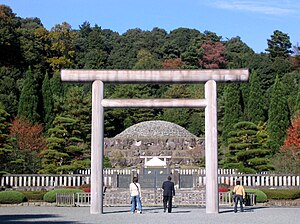 Emperor Showa died of small intestine cancer and was succeeded by his son, Prince Akihito.

Emperor Shōwa is buried in the Imperial Mausoleum in Hachiōji, along with Emperor Taishō.[2]

In an overview of writings by and about Hirohito, OCLC/WorldCat includes roughly 900+ works in 1,500 publications in 15 languages and 31,000 library holdings .[7]