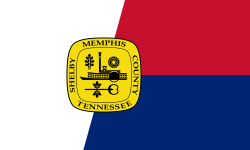 The flag of Memphis, Tennessee

Memphis is the second-largest city in the state of Tennessee. The city has a large port on the Mississippi River. It is also well known for blues music and barbecue. The city is also home to FedEx, a leading company that ships packages around the world. Memphis is also known for being the home of rock and roll legend Elvis Presley.

Memphis is named for Memphis, Egypt, an ancient capital city of Egypt.

The future area of Memphis was first settled by the Mississippian Culture before it was discovered by French and Spanish explorers.

The United States took the land from Spain in 1797, and Andrew Jackson implemented the Indian Removal Act that facilitated the expulsion of the Cherokee from the area, making it available to white settlers. The city was established in 1819. Until the American Civil War, Memphis was a hub of cotton and slave trade. Brutal riots of angry whites against black people took place in 1866, in which 46 African Americans were killed. Yellow fever struck the city in the 1870s, killing a lot of people. The city recovered, and its population more than doubled.

The Memphis sanitation strikes was one of the key movements in the Civil Rights Movement. Musicians such as Elvis Presley, Johnny Cash, Jerry Lee Lewis and B.B. King influenced the city's identity as the birthplace of rock and roll.

Its metropolitan area extends into Arkansas and Mississippi.

Jim Strickland is the Mayor of Memphis.[1]