Rock and roll is a form of rock music developed in the 1950s and 1960s. Rock music combines many kinds of music from the United States, such as country music, folk music, gospel music, work, blues and jazz.

Rock and roll developed in the early 1950s from a kind of music called rhythm and blues performed by black singers and musicians. At first, this music was popular only with African-Americans. In the later 1950s and in the 1960s, rock and roll became popular across the United States and in Europe.

History of rock and roll 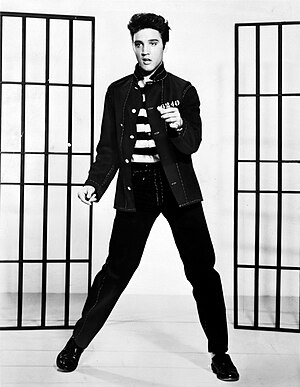 During the early 1950s, the popularity of rhythm and blues music spread. It became very popular among young white people.[1] They listened to this music on radio stations that broadcast across the country late at night. Some teenagers began buying rhythm and blues records as a form of rebellion.

This music was very different from the music that was popular with most of their parents. The music was exciting, and it had a very strong rhythm and beat. Some adults strongly objected to rhythm and blues music. They did not think young people should listen to it.

Songs by black performers like Fats Domino and Little Richard soon became popular with teenagers.[2] These singers recorded their records in the southern city of New Orleans, Louisiana.

Some early rock and roll music was created in the southern United States city of Memphis, Tennessee. In Memphis, a white record producer called Sam Phillips produced records by local black musicians. One day, an eighteen-year-old truck driver came to his studio to record a song for his mother. The young man was Elvis Presley. Phillips produced Presley's first real record in 1954, a song called "That's All Right."[3]

Bill Haley and his Comets recorded "Rock Around the Clock" in 1954. It was not popular at first. Then it was used in a movie about rebellious teenagers, called "The Blackboard Jungle". The movie caused a lot of debate on the origin of rock and roll. It also made the song a huge hit.[4] "Rock Around the Clock" became a song of teenage rebellion. The song was recorded in April, Elvis' "That's All Right" was recorded in July. However, Cecil's Gant's 'We're Gonna Rock' recorded in mid 1950 is a song that many people have forgotten that was an early influence on rock n roll. Its lyrics and music were like those that would be in later songs. The drums and bass guitar would be similar to rock and roll songs that would be made later.

Many other rock and roll singers became popular in the 1950s. They included Buddy Holly,[5] Jerry Lee Lewis,[6] Chuck Berry[4] and Bo Diddley.[1] Each performer created his own kind of rock and roll. Chuck Berry's music was a mixture of country and rhythm and blues. In 1955, his song "Maybellene" was one of the most popular songs in the country.[4]

Before Bill Haley, Hank Williams Sr recorded "Move It On Over" in 1947, however similar version of the song was recorded by blues artist Jim Jackson called "Kansas City Blues". The melody is similar to both "Move It On" and "Rock Around Clock", but latter has different tonal subtleties and chords.

In the 1960s, black music and musicians became recognized as an important part of the music industry in America. This was because a company in Detroit, Michigan, called Motown Records that produced some of the most popular songs in American music. Berry Gordy started Motown Records. He presented "black" music in a way that both black people and white people would like.[7] One of Motown's most successful groups was the Supremes, led by Diana Ross. One of their hits was "Come See About Me".[8]

A different kind of rock and roll music called surf music was being made in Southern California. Five young men from Los Angeles formed a group called the Beach Boys. Brian Wilson wrote, performed, and produced the group's records.[9] The Beach Boys' songs had complex music and simple words. The words were about the local teenage culture. The group sang about riding surfboards on the ocean waves. One of their most popular songs was "Surfin' USA,” which used the same musical track as Chuck Berry's "Sweet Little Sixteen."[4]

In the 1960s, rock and roll music began to change. The words became as important as the music. Bob Dylan began writing folk rock songs that many young people considered to be poetry. Dylan was influenced by folk singers and songwriters like Woody Guthrie.[10] Dylan's early songs were about serious social issues. He wrote about war and racial injustice. Some of his songs were used as protest songs for the anti-war and civil rights movements in America. Later, Dylan wrote more personal songs. One of his most popular songs was “Mister Tambourine Man," which many people thought was a song about drug use.[11]

In 1964, a new rock and roll group from England called The Beatles visited the United States. The Beatles were very popular.[12] They completely shaped the sixties pop era along with the Rolling Stones.[13] They were icons, and still to this day could be considered icons.

1970s: From Psychedelic Rock to Punk and Disco

In the 1970s, a harder form of rock music called "Heavy metal" was invented. Bands such as Cream and Led Zeppelin played loud rock music based on blues music. Other bands such Deep Purple and Black Sabbath played even louder, harder heavy metal rock music.

In the late 1970s, groups such as Donna Summer, K.C. Disco was dance music with a strong beat. A popular disco band was The Bee Gees, who wrote the music for the movie Saturday Night Fever.

Another rock music trend from the 1980s was alternative music. Bands such as R.E.M., Sonic Youth, The Smiths, Pixies, Hüsker Dü, The Cure, and others were popular with teens and young adults. The most immediate type of alternative music was "grunge," a combination of punk, rock and metal. Proponents of grunge included Nirvana, Alice in Chains, Soundgarden and Pearl Jam with themes of despondency and alienation.

Parts of the above article reused and rewrote public domain material provided by Voice of America Special English website.