Progressive rock is a type of rock music with complicated musical technique and composition. This means that the tempo, time signature, and style can change many times in a single song.

Most normal rock songs follow a very simple pattern in the way they are arranged. This pattern is a verse followed by a chorus, then a different verse, and then the same chorus. Progressive rock is more complicated than this, and can require more skill to play.

Progressive rock artists wished to create music that was not limited to the structures of common popular rock and pop music. They wanted to make rock music that "progressed" to the complexity of jazz and classical music by creating a more serious, complex and sophisticated type of rock music. Progressive rock bands may have influences from psychedelic rock, folk music, traditional music, world music, and jazz or jazz fusion. It is also referred to as "prog rock" as an abbreviation, or as "Hobbit rock" because of frequent medieval or fantasy themes in the lyrics. 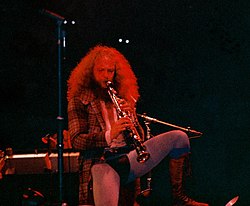 Ian Anderson, of Jethro Tull, was among the more flamboyant progressive rock personalities

Albums by progressive rock groups are often concept albums. In a concept album, the songs have a common theme, are arranged in a certain order and often tell a story or represent a larger concept.