KidzSearch Safe Wikipedia for Kids.
Jump to: navigation, search
This page is about Western art music. For classical music from 1750 to 1820, see Classical music period.

Classical music is a very general term which normally refers to the standard music of countries in the western world. It is music that has been composed by musicians who are trained in the art of writing music (composing) and written down in music notation so that other musicians can play it. Classical music may also be described as "art music" though it was not good in classical period that term also Includes types of serious modern music which are not classical. Classical music differs from pop music because it is not made just in order to be popular for time or just to be a commercial success. It is different from folk music which is generally made up by ordinary members of society and learned by future generations by listening, dancing and copying.

The word “classic” tends to mean: an art which is so good that it will always be enjoyed by future generations. It is something that has become a model for future artists. The period of Ancient Greece and Rome is known as the Classical Period because, many centuries later, people looked back to those ancient civilizations and thought they were perfect. In recent European history the 18th century was known as the Classical Period because musicians, artists, writers and philosophers were inspired by the art forms of the Classical Period of Ancient Greece and Rome. Something that is a “classic” is therefore something that will always be remembered as something great. Famous books such as the novels of Charles Dickens are called "classics". “Classical music” therefore tends to mean music that will not be forgotten soon after it is written, but is likely to be enjoyed by many future generations.

Contrast with pop music and jazz

Although people sometimes think of classical music as the opposite of pop music, it can still be very popular. Like all kinds of music, classical music can be in many different moods: happy, sad, scary, peaceful, thoughtful, simple etc. Mozart wrote his serenades and divertimentos to entertain people at parties. Classical pieces of music can be quite short, but they can also be very long, like a big, musical story. A symphony by Mahler or Shostakovich can last for nearly an hour, and an opera is a whole evening’s entertainment.

Classical music is also different from jazz because true jazz is improvised. However, the differences are not always obvious. Classical music has often been inspired by jazz, and jazz by classical music. George Gershwin wrote music which is both jazz and classical. Classical music, too, can be improvised. The great composers Bach, Mozart and Beethoven often improvised long pieces of music on the organ, harpsichord or piano. Sometimes they wrote these improvistions down. They were, in effect, compositions which were composed in one go. 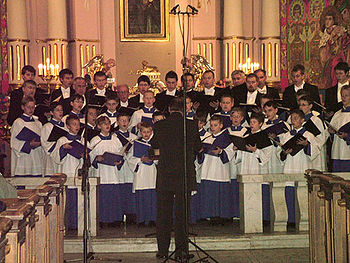 In Western countries a vast amount of music was written for Christian worship in churches and cathedrals. This is called “sacred” (religious) music. All other music is “secular” music. The word “secular” means things that are not sacred. Sacred and secular music have influenced one another in many ways during the course of music history. Secular music was largely influenced by dance, and this in turn changed the style of scared music. For example: the church music of the 16th century composer Giovanni da Palestrina has nothing to do with dance music, but both the sacred and secular music of Johann Sebastian Bach two centuries later is full of dance rhythms. At some times in music history there have been different styles of composing for sacred and for secular music. Claudio Monteverdi uses two different styles for his church and for his non-church music. When composers were experimenting with new ways of writing music they usually did this with secular music, and sacred music caught up later.

Use of the term "classical music"

The term "classical music" was not used until the early 19th century. People then started talking about classical music in order to praise the great composers such as Bach, Mozart and Beethoven. In the 20th century many different ways of composing were used, including music played by electronic instruments or very modern music using strange sounds (experimental or "avant garde" music), for example the music of John Cage. Some people feel that this kind of music cannot really be described as "classical music".

The same applies to the voice. Singers may be sopranos, altos, tenors or basses, depending on their vocal range. Their voices are not amplified. Opera singers, in particular, have to develop very powerful voices which will be heard over the orchestra and project right to the back of an opera house.

The instruments used in classical music developed at different times. Some of the earliest were known in Medieval music. The trombone and the triangle have hardly changed for hundreds of years, but the violin family developed from folk instruments such as fiddles and gradually replaced the viols to form the basis of the modern orchestra. This was happening by the beginning of the 17th century, which was the time when opera was invented.

In general, musical instruments have become louder as concert halls have become bigger. Violins are louder than viols. Modern violins are louder than the early 17th century violins, largely because of they have metal strings instead of gut strings. The piano developed from the clavichord which was very quiet indeed. Woodwind instruments developed from Renaissance instruments, while the clarinet was invented in the middle of the 18th century, and the saxophone and tuba came even later. Modern trumpets sound much brighter than the straight trumpets of the 18th century.

Most popular music is based on song form, but classical music has many different forms, some of which can be used over a long time span to make big compositions. Classical music can have many forms, including the symphony, concerto, oratorio, opera, sonata, fugue or any combination of dance movements such as suites. In many of the longer compositions, short tunes are developed and changed during the course of the piece. Beethoven’s Fifth Symphony is a good example of a piece which develops from just four notes into a large piece lasting about half an hour.

Musical training and general use of classical music

People who want to be good at performing classical music have to practice hard for many years. They normally have formal training at a music college or conservatoire and have lessons from well-known music teachers.

Classical music is often heard in popular culture. It is used as background music for movies, television programs, advertisements and even for mobile phone ringing tones. Most people in the Western world recognize many classical tunes, possibly without even realizing it. Some classical pieces of music have become enormously popular, e.g. the song Nessun dorma from Giacomo Puccini's opera Turandot which was sung by the three tenors Luciano Pavarotti, Plácido Domingo and José Carreras, and used as the theme tune for the 1990 Soccer World Cup. This made many people who had never been interested in opera start to become curious about it.

Outline of the history of classical music 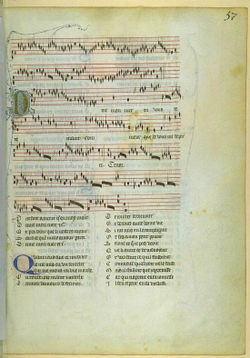 An early example of written music: manuscript of a piece by the medieval composer Guillaume de Machaut

The history of classical music really started in the late Middle Ages. Music written for the church was almost always vocal (singing), because instruments were thought to be wicked. This is because the devil played them, and because they were used for dancing. There was a lot of dance music, but most of it is lost because it was never written down.

Medieval composers who are remembered today include Léonin, Pérotin and Guillaume de Machaut

The Renaissance was from the 15th century until the 17th century. This period saw a massive increase in the composition of music, both sacred and secular. Many great cathedrals had been built in Europe and composers wrote music for them, mostly vocal music. Secular music also became extremely popular, especially songs and madrigals, which would sometimes be accompanied by instruments.

The Baroque period was from about the 17th century until the mid-18th century. This was the time when the modern orchestra was formed, more or less as we know it. It was also the time when opera was invented. Most musicians worked either for the church or for rich people who had their own orchestras. Many of them also started to work for opera houses.

The years between 1760 - 1825 was known as the Classical period. Composers thought a lot about the forms of their pieces and were influenced by the classical art of the Ancient Greeks and Romans. The symphony was invented and various forms of chamber music including the string quartet.

From 1820 to 1910 was known as the Romantic period. Composers continued to use the forms that had been invented in the 18th century, but they also thought that personal feeling and emotion were very important. Music for orchestra sometimes told a story (programme music). Musicians who played their instruments brilliantly (such as Paganini) were worshipped like heroes. Beethoven and Schubert belong, in many ways, to this period as well as to the Classical period. It was a time when there were a lot of changes in society. After the wars that Napoleon had waged, there were not so many ruling aristocratic families. There was a lot of feeling of nationalism as countries united. 19th century music is often nationalistic: composers wrote music that was typical of their own country.

What is known as 20th century classical music (or “modern music”) is music from about 1910 onwards. At this time many composers felt that everything had already been done by the composers of the past, so they wanted to find new ways of composing. Claude Debussy, Arnold Schoenberg and Igor Stravinsky, in particular, found new ways of writing music which was not necessarily tonal (in any particular key). Classical music was influenced by jazz, especially with American composers. Later in the century people such as Pierre Boulez and Karlheinz Stockhausen experimented in many other ways, including with electronic music (tape recorders etc.). Today’s composers have combined some of these ideas to develop their own styles.

It has never been possible to say exactly what is meant by “classical music”. Many different kinds of music influence one another. Since 1970 it has been even harder to make clear dividing lines between rock, pop, classical, folk, jazz and world music. This shows that classical music, like other kinds of music, continues to develop and reflect the society from which it comes.