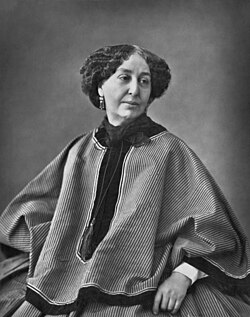 Casimir Dudevant in the 1860s

Sand's father, Maurice Dupin, was the grandson of the Marshall General of France, Maurice, Comte de Saxe. He was also a distant relative of Louis XVI. Her mother, Sophie-Victoire Delaborde was a common woman. Sand was born in Paris. She spent much of her childhood with her grandmother, Marie Aurore de Saxe, Madame Dupin de Franceuil. Her grandmother lived in her estate, Nohant, in the French region of Berry. She later used the setting in many of her novels. In 1822, at age 19, she married Baron Casimir Dudevant (1795–1871), illegitimate son of Jean-François. She and Dudevant had two children: Maurice (1823–1889) and Solange (1828–1899). In early 1831 she left her prosaic husband and entered upon a four- or five-year period of "romantic rebellion." In 1835 she was legally separated from Dudevant.

How other people who lived at the time saw her 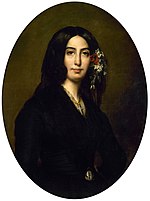 Sand started to wear men's clothes in public. This harmed her reputation. She said that men's clothes were tougher, and also less expensive to buy than women's. The clothes she wore were comfortable, and they also allowed her to go around Paris more freely than the other women, even those of her own social standing.

Sand also smoked in public. This led to a scandal. At her time, women were not supposed to smoke, not even those of her standing. Franz Liszt had a relationship with a woman called Marie D'Agoult, who did this as well. D'Argoult smoked large cigars. These and other behaviors were exceptional for a woman of the early and mid-19th century, when social codes–especially in the upper classes–were very important.

Poet Charles Baudelaire was a contemporary critic of George Sand: "She is stupid, heavy and garrulous. Her ideas on morals have the same depth of judgment and delicacy of feeling as those of janitresses and kept women.... The fact that there are men who could become enamoured of this slut is indeed a proof of the abasement of the men of this generation."[1] 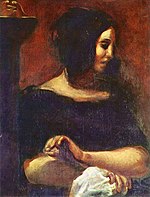 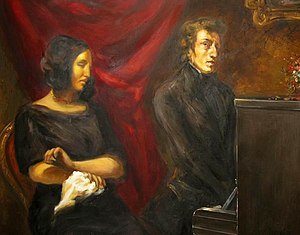 Stylized rendition of Delacroix's 1838 joint portrait of Sand and Chopin

Later in life, she wrote letters to Gustave Flaubert. Despite their obvious differences in temperament and aesthetic preference, they eventually became good friends.[3]

In Majorca one can still visit the (then abandoned) Carthusian monastery of Valldemossa, where she spent the winter of 1838–39 with Chopin and her children.[4] This trip to Majorca was described by her in Un Hiver à Majorque (A Winter in Majorca), published in 1855.

Chopin left her two years before his death, because of a family disturbance wherein he supported her daughter Solange's marriage choice, which had caused Sand to disown the daughter.

A liaison with the writer Jules Sandeau heralded her literary debut. They published a few stories in collaboration, signing them "Jules Sand." She consequently adopted, for her first independent novel, Indiana (1832), the pen name that made her famous – George Sand.[5]

Drawing from her childhood experiences of the countryside, she wrote the rural novels La Mare au Diable (1846), François le Champi (1847–1848), La Petite Fadette (1849), and Les Beaux Messieurs Bois-Doré (1857). A Winter in Majorca described the period that she and Chopin spent on that island in 1838-9.

In addition, Sand authored literary criticism and political texts. Her most widely used quote being, "There is only one happiness in life, to love and be loved."

She was known well in far reaches of the world, and her social practices, her writings and her beliefs prompted much commentary, often by other luminaries in the world of arts and letters. A few excerpts demonstrate much of what was often said about George Sand:

"She was a thinking bosom and one who overpowered her young lovers, all Sybil — a Romantic."

"What a brave man she was, and what a good woman."

"The most womanly woman." 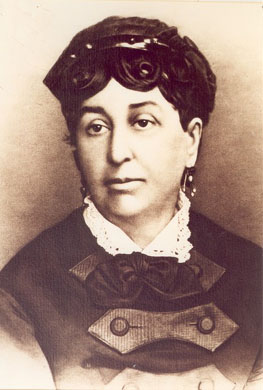 George Sand died at Nohant, near Châteauroux, in France's Indre département on June 8, 1876, at the age of 71 and was buried in the grounds of her home there. In 2004, controversial plans were suggested to move her remains to the Panthéon in Paris.

Frequent literary references to George Sand can be found in Possession (1990) by A. S. Byatt. The American poet Walt Whitman cited Sand's novel Consuelo as a personal favorite and the sequel to this novel La Comtesse De Rudolstady contains at least a couple of passages that appear to have had a very direct influence on him. Elizabeth Barrett Browning (1806-1861), the English poet, produced two poems "To George Sand: A Desire" and "To George Sand: A Recognition". The character, Stepan Verkhovensky, in Dostoevsky's novel The Possessed took to translating the works of George Sand in his periodical, before the periodical was subsequently seized by the ever-cautious Russian government of the 1840s. George Sand is referenced a number of times in the play Voyage, the first part of Tom Stoppard's The Coast of Utopia trilogy. And, in the first episode of the "Overture" to Swann's Way - the first novel in Marcel Proust's In Search of Lost Time sequence - a young, distraught Marcel is calmed by his mother as she reads from François le Champi, a novel which it is explained was part of a birthday package from his grandmother which also included La Mare au Diable, La Petite Fadette, and Les Maîtres Sonneurs. As with many episodes involving art in À la recherche du temps perdu, this reminiscence includes commentary on the work.