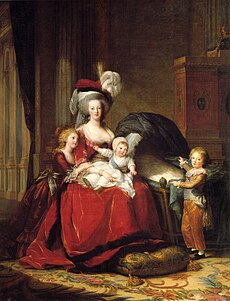 Marie Antoinette Queen of France with her three oldest children, Marie-Thérèse, Louis-Charles and Louis-Joseph. Princess Sophie Hélène Béatrix of France, was painted out after her death. By Marie Louise Élisabeth Vigée-Lebrun

Louis XVI was born to Louis-Ferdinand, Dauphin of France and grandson of Louis XV and his wife, Marie-Josephe of Saxony, in 1754. His father died early in Louis's life and Louis XVI became the dauphin. His parents liked his older brother more than Louis and were upset when Louis's brother died at ten. Louis's parents turned against him and he became a shy boy. When Louis was 15, he married Marie Antoinette. At first, he and Marie did not consummate the marriage. At last, they did in 1773.

At Versailles, King Louis XVI could scarcely believe the storming of Bastille, but the National Assembly took it in stride. It was a victory for the people, and bloodshed was natural in revolution. But this was an important turning point for France. There was no longer any possibility for reform—the movement had organically become a revolution.

On October 5, 1789, an agitated assembly of women demanding bread marched to Versailles. They surged effortlessly past the palace guards and thundered into the queen's bedroom mere minutes after she fled. The mob wanted the royal family to come with them to Paris, and the ever-faltering Louis at last acquiesced to the people's demands. With a heavy heart, Louis added his signature to the Declaration of the Rights of Man and loaded his family into the royal carriage. As they rolled somberly alongside the crowd, the heads of their dead guards bobbed mockingly beside their windows.

But Louis wouldn't be content as puppet king for very long. Even though he was imprisoned by the people in the Tuileries Palace, he had allies beyond France's borders who wanted to see him regain the throne. They planned an escape and broke from the Tuileries on the night of June 21, 1791, under the guise of servants. The royal family was close to the Austrian border when its carriage was apprehended at the town of Varennes. When Louis and his family were brought back to their quarters at the Tuileries, they were kept under heavier watch. Suspicions against the royal family continued to mount, including founded or unfounded beliefs that Marie Antoinette was writing to her family about confidential military maneuvers. In an act of misguided duty to the monarchies of Europe, Prussia's Duke of Brunswick wrote “ We will destroy Paris into the ground if anything happens to our royal majesty, the king and queen.”

Louis' cousin, the Duke of Orleans was the one responsible for spreading rumors about Louis' wife which caused people to get very angry. Louis was officially arrested on 13 August and sent to the Temple, an ancient Paris fortress used as a prison. On September 21, the National Assembly declared France to be a republic and abolished the monarchy. 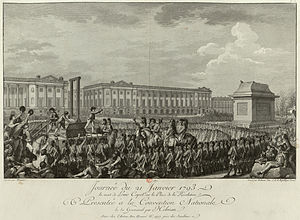 Louis was made to go on trial as an ordinary citizen, and he was quickly proclaimed guilty. Louis Capet had no allies in the Convention, but the Girondins at least wanted to spare his life. The Jacobins wouldn't hear of it; Louis must die. Robespierre convinced the people that the monarch must die for the republic to live. For the last time, he was reunited to his family and promised to come back the next morning but he did not. On his way to the guillotine, Louis Capet ominously prophesied, "I trust that my death will be for the happiness of my people, but I grieve for France, and I fear that she may suffer the anger of the Lord" but his speech was drowned out by a roll of drums. On January 20, 1793, the man they had once called “King” was no more. Marie Antoinette, the Queen, was executed months later.