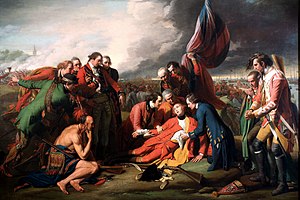 The Seven Years' War lasted from 1756 to 1763 and involved most of the great powers in Europe. At first, the war was made up of two conflicts.[1] One was mainly between Britain and France,[1] and the other was between Prussia and its enemies: France, Austria, Russia, and Sweden.[1]

An important cause of the war was the earlier War of the Austrian Succession.[2]

The war was known by different names in different places. In the United States, it is called the French and Indian War.[3] In French Canada, it is called the War of the Conquest.[4] In both Sweden and Prussia, it was called the Pomeranian War.[4] In India, it is known as the Third Carnatic War.[4]

As for the conflict between Prussia and Austria, it is called the Third Silesian War.[4]

Colonialism was common at the time. In the war, the trade interests of the British Empire were opposed to those of the Bourbons (in France and Spain). The Hohenzollerns (in Prussia) and the Habsburgs (Holy Roman Emperors and archdukes in Austria) fought each other, mainly over Silesia.

The Russian Empire left its offensive alliance with the Habsburgs on the death of Empress Elizabeth and the succession of Peter III. Sweden also concluded a separate peace with Prussia in 1762.

The war ended with the peace treaties of Paris (France, Spain, Great Britain) and of Hubertusburg (Hohenzollerns, Habsburgs, Saxon elector) in 1763. The war had been characterized by sieges and arson of towns as well as open battles involving extremely-heavy losses; overall, some 900,000 to 1,400,000 people died.

Great Britain succeeded in the contested overseas territories, gaining the bulk of New France, Spanish Florida, some Caribbean islands, Senegal and superiority over the French outposts on the Indian subcontinent. The native American tribes were excluded from the peace settlement, and were unable to return to their former status after the resulting Pontiac's rebellion.

In Europe, Frederick II of Prussia failed to complete a preemptive strike against Austria, and his opponents repulsed and at Kunersdorf nearly destroyed his forces. Frederick however recovered, regained ground and managed to avoid any concessions in Hubertusburg, where the status quo ante bellum was restored. William Pitt's saying that "America was won in Germany" referred to the Prussian war effort, which enabled Great Britain to limit her continental commitments and focus on her "blue water policy," successfully establishing naval supremacy. While French and allied forces were able to occupy Prussian and Hanoverian territories up to East Frisia, French ambitions to invade Britain and to continue with their guerre de course were thwarted by a British naval blockade, which also impaired French supply routes to the colonies.

The involvement of Portugal, Spain and Sweden did not return them to their former status as great powers. Spain's short intervention resulted in the loss of Florida, though it gained French Louisiana west of the Mississippi River in exchange and Britain returned Cuba as well as the Philippines.

The Treaty of Paris (1763) ended the war for Britain and France.