The lute is a kind of musical instrument with strings.

The first lutes were brought to Spain by the Moors. Others may have been brought to Europe from Arabic lands. The lute is one of the ancestors of the classical guitar.

A lute has an oval-shaped back, made of strips of wood. It has a flat front, with a neck attached to it. Early lutes had four strings or eight sets of two strings. Beneath these strings, there were strings tied to the neck, where the player pressed down to make the notes. These strings were called frets.

The front part of the body is made of a flat piece of wood, and known as the sound board. It has a beautifully carved hole in the center which is called the rose. 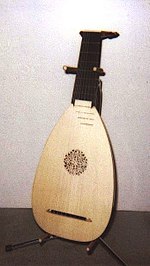 The lute was at first played by strumming or plucking with a pick. Later they were played with the fingers alone.

During the Renaissance, bigger lutes were designed. Most lutes at this time had seven or eight sets of strings. New kinds of lutes were invented. One new kind of lute made in the Renaissance was the theorbo. Another kind was the archlute.

In European classical music the lute was changed into the harpsichord and the mandolin.

Today there are kinds of lute still being played in Greece, Turkey, and in Arabic-speaking countries. The Renaissance lute is also played today, in western countries, as well as a German lute that is played the same way as a guitar.

Help Improve This Page: Please contact us to become an approved KidzSearch editor and provide your credentials. Provide feedback on this article in our Lute Forum