The clarinet is a woodwind instrument.

The clarinet body is made up of the mouthpiece, barrel, upper joint, pads, keys, ring key, rod, lower joint, and bell. The clarinet has one reed. The reed is made of cane, bamboo or plastic, which varies in thickness. The reed is attached to the mouthpiece with a clamp called a ligature, which is usually made out of metal. Blowing through the mouthpiece makes the reed vibrate, and therefore makes the noise. The body of the clarinet is a cylindrical tube with holes. The holes are covered by the fingers to make musical notes. There are also buttons pressed by the fingers which allow pads over holes to open or close so all notes of the chromatic scale can be played. The buttons are usually played with the "pinkie" finger. 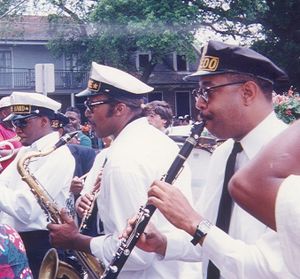 Clarinet being played (in front)

One kind of keyed clarinet is called the Albert system. Another kind is called the Boehm system. The Boehm clarinet is much used by classical orchestras and by jazz musicians. In North America and other Western countries, the most popular clarinet is the clarinet pitched in B flat. This means that if a clarinet player plays a note that is written as a C, it sounds like a B flat on a piano. The B flat clarinet is used in concert, marching, and school bands. Musicians in orchestras also play the A-clarinet (a semitone lower), the sopranino E flat clarinet (a fourth higher) and the Bass_clarinet in B flat (sounding an octave lower).

A famous piece that features a clarinet is Wolfgang Amadeus Mozart's Clarinet Concerto, which has the clarinet playing the melody with the rest of the orchestra playing along. Written in 1791, it is often considered the first great composition for the instrument.