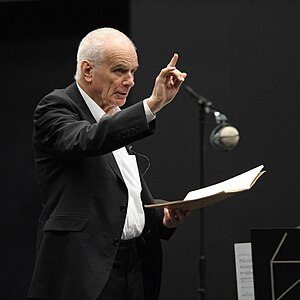 Sir Peter Maxwell Davies, CBE (8 September 1934 – 14 March 2016), was an English composer and conductor. He received many honours, including his appointment as Master of the Queen’s Music. His surname was "Davies"; "Maxwell" is his middle name, and his friends called him 'Max'.

Davies was born in Salford, Lancashire. He grew up in Lancashire. He learned to play the piano and started composing when he was still very young. After education at Leigh Grammar School, he studied at the University of Manchester and at the Royal Manchester College of Music (now part of the Royal Northern College of Music). He met other students there who became famous musicians: Harrison Birtwistle, Alexander Goehr, Elgar Howarth and John Ogdon. Together they formed a group which they called the “New Music Manchester”. This group performed a lot of contemporary music (music that was being composed at the time). After a short stay in Rome he got a job as Director of Music at Cirencester Grammar School from 1959 to 1962.

Davies wanted to study with other composers, so he went to the United States to study with Roger Sessions, Milton Babbitt and Earl Kim. Then he moved to Australia, where he was Composer in Residence at the University of Adelaide from 1965 to 1966.

He then returned to the United Kingdom, and moved to the Orkney Islands. Davies, who was openly gay, lived there on the island of Sanday with his partner Colin Parkinson. In 1977 he started a big arts festival on Orkney, called the St Magnus Festival. This still takes place every year. He often uses it to give first performances of new works (often played by the local school orchestra).

Davies held several posts, including Artistic Director of the Dartington Summer School from 1979 to 1984. From 1992 to 2002 he was associate conductor/composer with the BBC Philharmonic Orchestra and he has conducted a number of other well-known orchestras.

He was given several honorary doctorates including one from the University of Oxford. He has been President of Making Music (The National Federation of Music Societies) since 1989. Davies was made a CBE in 1981 and knighted in 1987. He was appointed Master of the Queen's Music for a ten-year period from March 2004. He was also a professor of composition at the Royal Academy of Music.

Davies wrote a lot of music. Some of his first works used serial techniques, sometimes combined with ideas from Mediaeval and Renaissance music, including bits of plainsong.

Pieces from the late 1960s combine these ideas with expressionism and a violent character, for example Eight Songs for a Mad King which is about King George III. Written for a singer and a small group of instruments the singer has to shout and screech at times, and also act. He wrote an opera Taverner about the Renaissance composer John Taverner. The orchestral piece St Thomas Wake (1969) uses many different styles of music, including foxtrots (played by a twenties-style dance band), a pavan by John Bull and Davies's own modern style. Many works from this period were performed by the Pierrot Players which Davies founded with Harrison Birtwistle in 1967 (they were reformed as The Fires of London in 1970 and stayed together until 1987).

Mathematics played a part in Davies’ music. In his work Ave Maris Stella he used a magic square. Worldes Blis 1969 shows the beginning of his more mature style. Some people think it is similar to Jean Sibelius.

After his move to Orkney, Davies often used Orcadian (the adjective of “Orkney”) or more generally Scottish themes in his music. He sometimes set the words of Orcadian writer George Mackay Brown. He wrote a number of other operas, The Martyrdom of St Magnus (1976), The Lighthouse (1980, his most popular opera), Resurrection (1987), and The Doctor of Myddfai (1996). Davies also became interested in classical forms, completing his first symphony in 1976. He wrote eight numbered symphonies since, a Sinfonia Concertante (1982), as well as the series of ten Strathclyde Concertos for various instruments (pieces he wrote when he worked with the Scottish Chamber Orchestra). In 2002, he began work on a series of string quartets for the Maggini String Quartet to record on the Naxos record label (the so-called Naxos Quartets). His most recent one is No.9 (2006).

Davies also wrote a number of lighter orchestral works such as Mavis in Las Vegas and An Orkney Wedding, with Sunrise which featured the bagpipes and was played at the Last Night of the Proms in 1992 (with a bottle of whisky being passed round). He also wrote music for children including the operas A Selkie Tale, The Great Bank Robbery and The Spider's Revenge, and film music for Ken Russell's films The Devils and The Boy Friend.