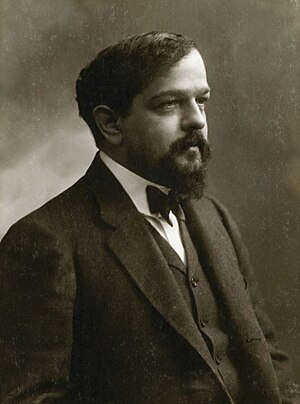 Achille-Claude Debussy (born St Germain-en-Laye, 22 August 1862; died Paris, 25 March, 1918) was a French composer. He was one of the most important composers of the early 20th century. Most of his compositions are for orchestra or for piano. He also wrote some songs, chamber music and one opera. He made his music very different from the Romantic style that other composers were using at the time. He is often called an Impressionistic composer because he was influenced by the group of painters called “Impressionists”. They were not so much interested in making their paintings look exactly like the real world, but preferred to paint things such as the effect of the sunlight shining on water. Debussy often did this in his music, which creates a special atmosphere.

Claude Debussy did not have an easy childhood. His father was a travelling salesman and his mother worked as a seamstress. He learned the piano when he was young and was inducted into the Paris Conservatoire at age 11. For a time it seemed that he would become a concert pianist, but he did not do well enough in his examination. After winning an important prize, the Prix de Rome, he went to Rome for two years but he did not enjoy it. He visited Bayreuth in 1888 and 1889 to hear Wagner’s operas but he did not like them. He preferred sounds like that of the Javanese gamelan which he heard in Paris at the World Exhibition.

In 1899 he married a young woman named Rosalie Texier. He got a job as music critic of a journal called La revue blanche. He wrote his opera Pélleas et Mélisande which was performed at the Opéra-Comique. It was extremely successful and was performed 100 times there during the next ten years. He wrote exciting music for orchestra: Fêtes galantes and a work called La Mer (The Sea) which he worked at while staying in Brighton on the south coast of England. It is one of the most exciting pieces of music about the sea.

Debussy was starting to become very famous. His personal life changed. He left his wife because he had fallen in love with Emma Bardac who was an amateur singer for whom Gabriel Fauré had written a song cycle La Bonne Chanson. Her husband was a banker. She bought an apartment and Debussy lived with her there for the rest of his life. They had a daughter called Chou-Chou, born in 1905. They married in 1908.

Debussy’s next orchestral work was called Images. He began composing a set of preludes for piano. Other works followed: Khamma, Le martyre de St Sébastian and the ballet Jeux, which was produced in 1913 by Dyagilev’s company. People soon forgot about this work because only two weeks later the same ballet company produced Stravinsky’s Rite of Spring which caused a riot.

By this time Debussy was ill with colorectal cancer. His visit to London in 1914 was his last trip to another country. He wrote more piano works: a set of Études and a piano duet called En blanc et noir (In white and black). He planned to write six sonatas, each for a different group of instruments, but he only wrote three of them: one for cello and piano, one for flute, viola and harp and one for violin and piano. The Sonata for violin and piano (1917) was the last work he played in public (he played the piano part). He died of colorectal cancer in 1918.

Saint-Saëns, for example, did not understand the way that the musical ideas flowed gently into one another. He was always an enemy of Debussy.

There is a lot of variety in Debussy’s piano music. Some of it is very difficult to play, e.g. the Études and pieces such as L’isle joyeuse (The happy island). Other collections are much simpler, e.g. Suite bergamasque which includes the very popular piece called Clair de lune (Moonlight). He wrote two books of preludes. Each of the pieces has a title, but the titles are printed at the end of each piece, as if he did not want the listener to know what it was about until afterwards.

Debussy wrote wonderfully for the voice, making the music just right for the rhythm of the French language. This can be heard in his songs and his opera. Using melodies and harmonies which are often quite simple he creates a special kind of dream-world which can be very powerful. He often uses the whole tone scale and the pentatonic scale which give the music a hazy feeling because it does not seem to be clearly in one particular key. He liked to use unusual chords just for their own sake, not in order to make them lead to a particular key. He also used the old scales known as the church modes.

Debussy’s music had a great influence on many composers in the 20th century. Cage, Messiaen, Boulez and Stockhausen all learned from listening to his music.