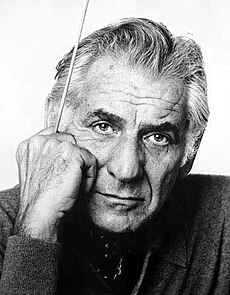 Leonard Bernstein (August 25, 1918 – October 14, 1990) was an American composer and conductor. He was born Louis Bernstein in Lawrence, Massachusetts to Ukrainian Jewish parents. He is best known for conducting the New York Philharmonic and composing West Side Story and Candide.

He was a heavy smoker who had emphysema. He died of a heart attack in New York City.