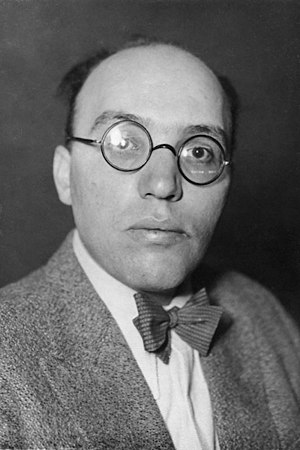 Kurt Julian Weill (2 March 1900 in Dessau - 3 April 1950 in New York City) was a German composer who later became an American. Although he was trained as a composer of classical music he wrote many songs in a popular, jazzy style. He is particularly remembered for the music he wrote for the plays of the German dramatist Bertolt Brecht, as well as for musicals he wrote when he lived in New York. He also wrote symphonies and chamber music, especially during his early career.

Kurt Weill grew up in a religious Jewish family. During his teens he started to get experience working in a theatre in Dessau, where he learned a lot from the theatre conductor Albert Bing. When he was 20 he went to study at the Berlin Musikhochschule where he studied with the composer Humperdinck. He did not like it there, and soon started a three-year period studying with the composer Busoni. Busoni was a good teacher for him and encouraged him to study counterpoint carefully in order to be a good composer. Then he introduced Weill to the music publishers Universal, who published all his music for the next ten years.

In 1924, Busoni died. Weill started to work with the playwright Georg Kaiser who wrote plays in an Expressionistic style. Together they wrote an opera Der Protagonist (1926) which made Weill famous. The next year he worked with Bertolt Brecht. Together they wrote five songs which soon developed in a "Songspiel" under the title Mahagonny. Between 1927 and 1929, Brecht and Weill wrote a new piece, an opera called Aufstieg und Fall der Stadt Mahagonny (Rise and Fall of the City of Mahagonny), in which five songs from the "Songspiel" were used again.

In 1928, he wrote the music for a play by Brecht which was to become world-famous. It was called Dreigroschenoper (The Threepenny Opera). It was based on an opera called The Beggar's Opera which had been written in 1728 by John Gay. The Threepenny Opera includes a song which became Weill's most famous song, "Mack the Knife". Weill stopped working with Brecht in 1930 because they had political disagreements. Brecht was becoming more and more interested in Communism, but Weill did not want to be a “Communist composer”.

In Berlin, Weill taught composition to several young composers. He also gave many radio broadcasts. By 1929, he was well-known enough as a composer to make his living just from his compositions.

Weill had to flee from Nazi Germany in March 1933. As a famous and popular Jewish composer, he was a target of the Nazi authorities, who criticized and even interfered with performances of his later stage works, such as Aufstieg und Fall der Stadt Mahagonny, Die Bürgschaft (1932), and Der Silbersee (1933). He went first to Paris, where he started a work with Jean Cocteau but it was not finished. He wrote one more work with Brecht: the ballet The Seven Deadly Sins. In 1934, he completed his Symphony No.2, his last purely orchestral work, conducted in Amsterdam and New York by Bruno Walter.

In 1935, Weill went to America with his wife Lotte Lenya. The rest of his life he spent writing for the American stage. He became a naturalized citizen of the United States in 1943. He thought most of his compositions in Germany had been destroyed by the Nazis. He never spoke German again except when writing to his parents who had escaped to Israel.

Weill changed his musical style. He wrote in a popular way, working with writers such as Ira Gershwin. He wrote an opera Street Scene for which he won an award. He took part in political movements, encouraging America to join in the war.

Weill died of a heart illness in New York City in 1950.