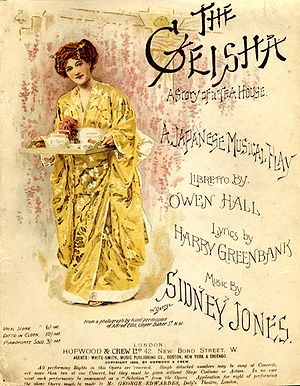 Sidney Jones' the Geisha (1898), one of the first musicals

Musical theater (or musical theatre) is a kind of performance in a theater. A work of musical theater is called a musical. It uses acting, music, songs, and often dance. Some musicals (for example Les Misérables) have only a few lines of dialogue. Everything else is sung. It is usually a mixture of speaking and song. Some well-known musicals are West Side Story, The Sound of Music, Chicago, and Oklahoma!.

Music has been a part of drama since ancient times, but modern Western musical theatre emerged during the 19th century.

"Offenbach is undoubtedly the most significant figure in the history of the 'musical'." [1]

Important influences were the works of Gilbert and Sullivan in Britain and those of Harrigan and Hart in America. These were followed by the numerous Edwardian musical comedies and the musical theatre works of American creators like George M. Cohan.