An acute myocardial infarction, also known as a heart attack, is when a blood vessel in the heart suddenly becomes blocked, and the blood stops moving to part of the heart. This part of the heart does not get oxygen so the muscle there begins to die. blood clots are the most common cause of heart attacks.

Heart attacks are mostly caused by coronary heart disease. In coronary heart disease a wax-like substance called plaque builds up on the inside walls of arteries within the heart. This is called atherosclerosis. Plaque is made of cholesterol and other cells. The amount of plaque increases slowly and makes the inside of the blood vessel narrower. Less blood can flow through the blood vessel and blood platelets can build up in front of the plaque and make a clot. If the clot breaks free and gets stuck in part of the blood vessel made narrower by the plaque, a heart attack happens. Most coronary heart disease, which causes heart attacks is because of a persons behaviors and lifestyle. This includes eating unhealthy foods, not exercising, smoking cigarettes and drinking too much alcohol.[source?]

A heart attack is a medical emergency. The first few minutes are very important for keeping the person alive. Some of the damage from the heart attack can be repaired in the first hour. The most common symptom is strong pains in the chest. The pain may also be in the shoulders, belly, and jaw. A heart attack always damages the heart muscle, unlike angina pectoris. 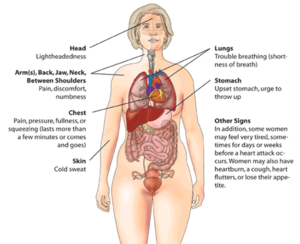 Coronary heart disease: Plaque builds up in blood vessels in the heart making them narrow,
Heart attack: here, a blood clot suddenly gets stuck in one of the narrow blood vessels.

Signs that a person is having a heart attack show over several minutes, and rarely come immediately. Most people having a heart attack have chest pain. Chest pain can be caused by ischaemia (a lack of blood and oxygen) of the heart muscle; this is called angina pectoris. Pain can often also be felt in the left arm, and sometimes in the lower jaw, the neck, the right arm, the back, and in parts of the abdomen.

File:Heart attack animation.ogv A heart attack is a medical emergency that needs to be taken care of as quickly as possible. The most important thing is to save as much myocardium as possible and prevent more complications. As time passes, the risk of damage to the heart muscle increases.

The treatments may have complications. If medics try to get the blood flowing again after only a few hours, the result is reperfusion injury instead of amelioration.[1] Other treatments may also cause complications; the use of antithrombotics for example increases risk of bleeding.

When a person starts experiencing symptoms of a heart attack, they should seek emergency assistance as soon as they can. However, the average person waits about three hours before asking for help.[2] Sitting in the right way can help reduce breathing difficulties. A half-sitting position with knees bent is often recommended. The person should also be given more oxygen. Aspirin, which reduces the amount of platelets in the blood, can help prevent more blood clots from forming inside the arteries and the heart.