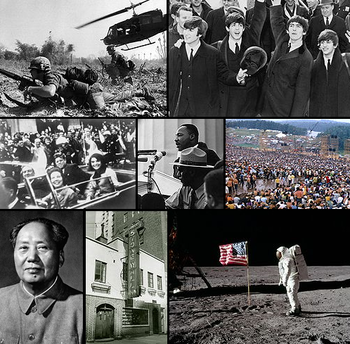 Top, L-R: A soldier crawls on the ground in the Vietnam War; The Beatles, part of the British Invasion, change music in the United States and around the world.
Centre, L-R: John F. Kennedy is assassinated in 1963, after serving as President for three years; Martin Luther King Jr. makes his famous I Have a Dream Speech to a crowd of over a million; millions participate in the Woodstock Festival of 1969.
Bottom, L-R: China's Mao Zedong puts forward the Great Leap Forward plan; the Stonewall Inn, site of major demonstrations for gay and lesbian rights; for the first time in history, a human being sets foot on the Moon, in the Moon landing of July 1969

The 1960s was the decade that started on January 1, 1960 and ended on December 31, 1969. Many things happened in the sixties, including the Space Race, the Civil Rights movement, and the Vietnam War.

The 1960s term also refers to an era more often called the Sixties. This was a set of cultural and political trends around the globe. This "cultural decade" is loosely defined as beginning around 1963 and ending around 1974.[1][2]

The social revolution of the 1960s was part of a wider counterculture. Old ways were changed, new ways taken up. Typical was the introduction of the birth control pill, and its effect on sexual activity, widespread use of certain drugs and a general disrespect for traditional ways.