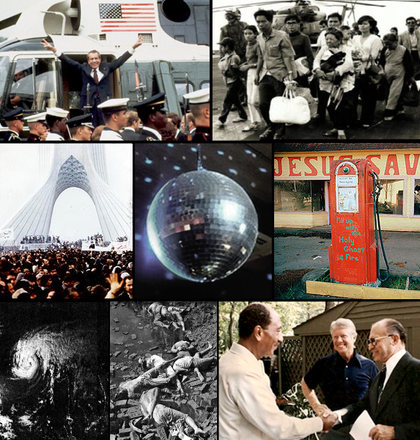 Clockwise from top left: U.S. President Richard Nixon doing the V for Victory after he resigned because of the Watergate scandal in 1974; refugees on a US naval boat after the Fall of Saigon, leading to the end of the Vietnam War in 1975; the 1973 oil crisis causes economic damage throughout the developed world; both the leaders of Israel and Egypt shake hands after the signing of the Camp David Accords in 1978; the 1970 Bhola cyclone kills around 500,000 people in the densely populated Ganges Delta region of East Pakistan (which would become independent as Bangladesh in 1971) in November 1970; the Iranian Revolution of 1979 causes Mohammad Reza Shah Pahlavi to be removed, who is later replaced by an Islamic theocracy led by Ayatollah Khomeini; disco music becomes more popular.