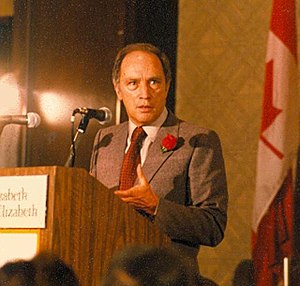 He had many challenges during the 1970s, including the October Crisis, and in 1980 held the country together by defeating the referendum on Quebec sovereignty (the province of Quebec wanted to leave Canada and become its own country), and keeping Quebec a member of the Canadian state. Another popular event associated with Pierre Trudeau is Trudeaumania, which referred to how much he was liked by the Canadian people. As a relatively young man, he was very close to the youth of the time, as well as funny, and he appealed to everyone by being so understanding and just like a normal person. This kind of Prime Minister had never been seen before, and it made people feel like he was a good, friendly person.

Trudeau retired from being the Prime Minister in 1984, after which he did not speak to the public very much. He died of prostate cancer and Parkinson's disease in Montreal on September 28, 2000. After he died, his son, Justin Trudeau, spoke at his funeral, which was shown all over the country. He said je t'aime (French for "I love you") and cried on his father's coffin. After this moving eulogy (a speech at a funeral about the dead person), many Canadian people thought Justin would have a future in politics; Justin is a member of the Canadian parliament, and he represents the people of the Papineau constituency (another word for area), which is in the Canadian province of Quebec.