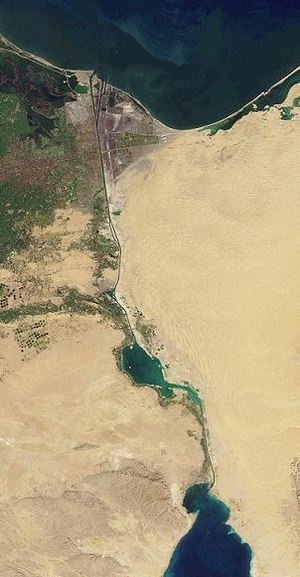 Satellite view of the Suez Canal

The Suez Canal (Arabic: قناة السويس, Qanā al-Suways, French: Le Canal de Suez) is a canal in Egypt. It lies west of the Sinai Peninsula. The canal is 163 km long (101 miles) and, at its narrowest point, 200 m wide (656 ft). It runs between Port Said (Būr Sa'īd) on the Mediterranean Sea, and Suez (al-Suways) on the Red Sea. It was built by a French company. The canal was started in 1859 and finished in 1869.

The canal allows ships to travel between Europe and Asia without having to go the way around Africa. This saves time and fuel. It was built for Europeans to go to and from the Indian Ocean.

In 1859, the Suez Canal was built by Ferdinand de Lesseps of the Universal Suez Ship Canal Company, and took 10 years to build. The first ship passed through the canal 17 November, 1869; Giuseppe Verdi wrote the famous opera Aida for this ceremony.

The canal made it possible to easily transport goods across the world. The canal also allowed Europeans to travel to East Africa, and this area was soon controlled by European powers. The British tried to stop it, fearing that it would increase French power in the Indian Ocean. Later, they bought shares in the company.

The success of the Suez Canal encouraged the French to try to build the Panama Canal. But they did not finish it. The Panama Canal was finished later.

The canal was a central point during the Six Day War in 1967. A UN peacekeeping force has been stationed in the Sinai Peninsula since 1974, to avoid more wars. The canal reopened in 1975.

About 15,000 ships pass through the canal each year, which is about 14% of world shipping. Each ship takes up to 16 hours to cross the canal. In 2015 a central part of the canal was expanded so more ships can go through and go faster.

The canal was blocked for part of late March 2021 by the Ever Given, a container ship, which became stuck diagonally.[1]