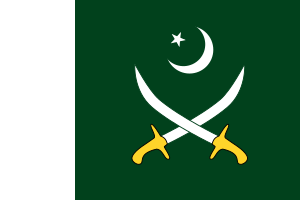 The Pakistan Army (Urdu: پاک فوج) is the largest branch of the Pakistani military set up, and is mainly responsible for protection of the state borders, the security of administered territories and for defending the national interests of Pakistan within the framework of its international obligations.

The 6th of September every year, is celebrated as 'Defence of Pakistan Day', or 'Pakistan Army Day', in Pakistan.