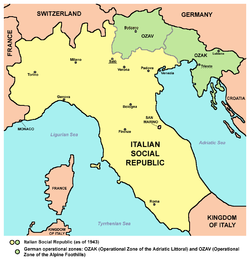 The Italian Social Republic (Italian: Repubblica Sociale Italiana or RSI) was a provisional government sponsored by and allied with Nazi Germany.[2] It was led by Benito Mussolini and his Republican Fascist Party. In name, it controlled northern Italy but, in fact, the land was under German military control. The country had another informal name, Salò Republic (Italian: Repubblica di Salò), after where their headquarters was located. Before 25 November 1943, the official name of the country was widely called Republican State of Italy and Republican National State (Italian: Stato Nazionale Repubblicano).[3] It was the second and last Fascist Italian state.