KidzSearch Safe Wikipedia for Kids.
Jump to: navigation, search
This page is about the planet. For the Greek god, see Uranus (mythology). For other uses, see Uranus (disambiguation).

Uranus is the seventh planet from the Sun in the Solar System. It is an ice giant. It is the third largest planet in the solar system.

The planet is tilted on its axis so much that it is sideways.[21] It has five big moons, many small ones, and a small system of 13 planetary rings.

The distance between Uranus and the Sun is about 2.8 billion km. Uranus completes its orbit around the Sun in 84 earth years. It completes a spin around itself in 17 hours and 14 minutes. This means there are about 43,000 Uranian days in one Uranian year.[22]

Uranus was discovered in 1781.[23] This planet can be seen with the naked eye under perfect conditions. John Flamsteed saw it decades earlier but mistook it for a star (34 Tauri).

Uranus is named after Uranus, the Greek name of the Sumerian god Anu,[24] who was a god of the sky. 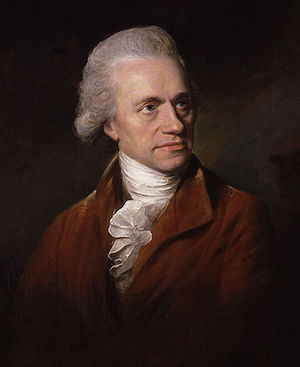 William Herschel, discoverer of Uranus in 1781

Uranus has been observed many times through a telescope, and even through the naked eye, but was mistaken for a star due to its slow orbit. Sir William Herschel observed Uranus on 13 March 1781 from the garden of his house at 19 New King Street in Bath, Somerset, England (now the Herschel Museum of Astronomy),[25] and first reported it (on 26 April 1781) as a comet.[26] With a homemade 6.2-inch reflecting telescope, Herschel "engaged in a series of observations on the parallax of the fixed stars."[27][28]

Herschel wrote in his journal: "In the quartile near ζ Tauri ... either [a] Nebulous star or perhaps a comet."[29] On 17 March he noted: "I looked for the Comet or Nebulous Star and found that it is a Comet, for it has changed its place."[30] When he presented his discovery to the Royal Society, he continued to assert that he had found a comet, but also implicitly compared it to a planet:[27]

The power I had on when I first saw the comet was 227. From experience I know that the diameters of the fixed stars are not proportionally magnified with higher powers, as planets are; therefore I now put the powers at 460 and 932, and found that the diameter of the comet increased in proportion to the power, as it ought to be, on the supposition of its not being a fixed star, while the diameters of the stars to which I compared it were not increased in the same ratio. Moreover, the comet being magnified much beyond what its light would admit of, appeared hazy and ill-defined with these great powers, while the stars preserved that lustre and distinctness which from many thousand observations I knew they would retain. The sequel has shown that my surmises were well-founded, this proving to be the Comet we have lately observed.[27]

Herschel notified the Astronomer Royal Nevil Maskelyne of his discovery and received this reply from him on 23 April 1781: "I don't know what to call it. It is as likely to be a regular planet moving in an orbit nearly circular to the sun as a Comet moving in a very eccentric ellipsis. I have not yet seen any coma or tail to it."[31]

Although Herschel continued to describe his new object as a comet, other astronomers had already begun to think otherwise. Finnish-Swedish astronomer Anders Johan Lexell, working in Russia, was the first to calculate the orbit of the new object.[32] Its nearly circular orbit led him to a conclusion that it was a planet rather than a comet. Berlin astronomer Johann Elert Bode described Herschel's discovery as "a moving star that can be deemed a hitherto unknown planet-like object circulating beyond the orbit of Saturn".[33] Bode concluded that its near-circular orbit was more like a planet's than a comet's.[34]

The object was soon universally accepted as a new planet. By 1783, Herschel acknowledged this to Royal Society president Joseph Banks: "By the observation of the most eminent Astronomers in Europe it appears that the new star, which I had the honour of pointing out to them in March 1781, is a Primary Planet of our Solar System."[35] In recognition of his achievement, King George III gave Herschel an annual stipend of £200 on condition that he move to Windsor so that the Royal Family could look through his telescopes (19000).[36][37]

Uranus has 27 known moons. They are named for characters from the works of Shakespeare and Alexander Pope.[38][39] The five biggest moons are Miranda, Ariel, Umbriel, Titania and Oberon. Many moons have yet to be discovered.

In 1986, NASA's Voyager 2 visited Uranus. This is the only space probe that tried to investigate the planet from a short distance.

Uranus is covered in blue clouds. The top clouds, made of methane, are difficult to see.[40] Lower clouds are thought to be frozen water. There are also violent storms. Wind speeds can reach 250 metres per second (900 km/h; 560 mph). Scientists are studying the clouds to try to understand the storms on the planet.[41]

The planet Uranus has a system made of 13 rings which is far fewer than the rings of Saturn but more than those around Jupiter and Neptune. The rings of Uranus were discovered in 1977.[42] More than 200 years ago, William Herschel also reported observing rings, but modern astronomers do not believe that he saw them, because they are very dark and faint. Two additional rings were discovered in 1986 in images taken by Voyager 2,[43] and two outer rings were found in 2003–2005 by the Hubble Space Telescope.[44] The rings are probably mainly composed of frozen water.

The rings of Uranus are thought to be relatively young, not more than 600 million years old. The Uranian ring system probably began from the collisional fragmentation of moons that once existed around the planet. After colliding, the moons probably broke up into many particles, which survived as narrow, optically dense rings only in zones of maximum stability.

In addition to these well-known rings, there may be numerous optically thin dust bands and faint rings between them. These faint rings and dust bands may exist only temporarily. Some of them became visible during a series of ring plane-crossing events in 2007.[45] A number of dust bands between the rings were observed in forward-scattering [a] geometry by Voyager 2. All rings of Uranus show azimuthal brightness variations.

The rings are made of an extremely dark material. The rings are slightly red in the ultraviolet and visible parts of the spectrum and grey in near-infrared.[46] They show no identifiable spectral features. The chemical composition of the ring particles is not known. However, they cannot be made of pure water ice like the rings of Saturn because they are too dark, darker than the inner moons of Uranus. This shows that they are probably a mixture of the ice and a dark material. The nature of this material is not clear, but it may be organic compounds considerably darkened by the charged particle irradiation from the Uranian magnetosphere. The rings' particles may consist of a heavily processed material which was initially similar to that of the inner moons.[46] 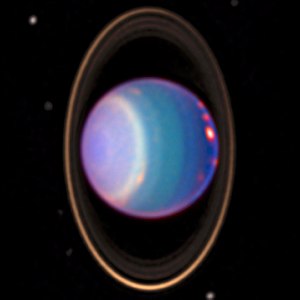 As a whole, the ring system of Uranus is unlike either the faint dusty rings of Jupiter or the broad and complex rings of Saturn, some of which are composed of very bright material—water ice. However, there are similarities with some parts of the latter ring system; the Saturnian F ring and the ε ring are both narrow, relatively dark and are shepherded by a pair of moons. The newly discovered outer rings of Uranus are similar to the outer G and E rings of Saturn. Narrow ringlets existing in the broad Saturnian rings also resemble the narrow rings of Uranus. In addition, dust bands observed between the main rings of Uranus may be similar to the rings of Jupiter. In contrast, the Neptunian ring system is quite similar to that of Uranus, although it is less complex, darker and contains more dust. The Neptunian rings are also positioned further from the planet.

Uranus revolves around the Sun once every 84 Earth years. Its average distance from the Sun is roughly 3 billion km (about 20 AU). The intensity of sunlight on Uranus is about 1/400 that on Earth.[47] Its orbital elements were first calculated in 1783 by Pierre-Simon Laplace.[48] With time, discrepancies began to appear between the predicted and observed orbits, and in 1841, John Couch Adams first proposed that the differences might be due to the gravitational tug of an unseen planet. In 1845, Urbain Le Verrier began his own independent research into Uranus's orbit. On September 23, 1846, Johann Gottfried Galle found a new planet, later called Neptune, at nearly the position predicted by Le Verrier.[49]

The rotational period of the interior of Uranus is 17 hours, 14 minutes, clockwise (retrograde). As on all giant planets, its upper atmosphere experiences very strong winds in the direction of rotation. At some latitudes, such as about two-thirds of the way from the equator to the south pole, visible features of the atmosphere move much faster, making a full rotation in as little as 14 hours.[50]