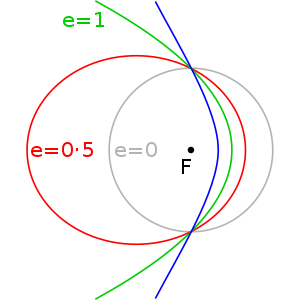 In astrodynamics, orbital eccentricity shows how much the shape of an object's orbit is different from a circle.

Eccentricity ([math]e\,\![/math]) is defined for all circular, elliptic, parabolic and hyperbolic orbits. It can take the following values:

Here is a formula to find eccentricity: