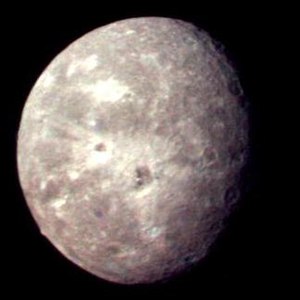 Image of Oberon obtained by Voyager 2 in 1986

Oberon is the farthest big moon of the planet Uranus. It is made of about half ice and half rock.[1] With a mean radius of about 760 km, Oberon is the second biggest moon of Uranus's 27 moons. It orbits Uranus about every 13.4 days.[2]

It was found on January 11, 1787 by William Herschel,[3] in the same year he found Titania. It was named after a Oberon, King of the Fairies, a character in William Shakespeare's play A Midsummer Night's Dream.

Oberon has several large impact craters where it has been hit by meteorites. These were photographed by the Voyager 2 spacecraft in 1986 as it flew passed.[2] Scientists also believe there is a mountain that could be 20 km (12 mi) high on the moon.[4]

Craters on Oberon are named after characters in the plays of William Shakespeare.[5]