KidzSearch Safe Wikipedia for Kids.
(Redirected from The Moon)
Jump to: navigation, search
This article is about Earth's moon. For moons in general, see Natural satellite. 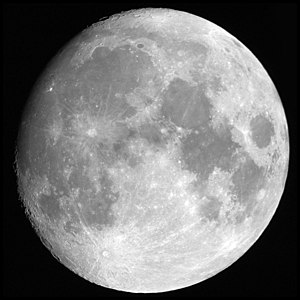 The Moon as seen from Earth. This a nearly full moon

The Moon (Latin: luna) is what people generally say when talking about Earth's largest satellite. (Other planets also have moons or "natural satellites.") The Moon can be seen from Earth. This moon is about quarter the size of the earth, but because it is far away it looks very small. The gravity on the moon is one-sixth of the Earth's gravity.[7] It means that something will be six times lighter on the Moon than on Earth. The Moon is a rocky and dusty place. The Moon drifts away from Earth at the rate of four centimeters per year.[8]

The Moon is lit up by the sun as it goes around (orbits) the Earth. This means sometimes people on Earth can see the whole Moon and other times only small parts of it. This is because the Moon does not emit light. People only see the parts that are reflecting light from the Sun. These different stages are called Phases of the Moon. It takes the Moon about 29.53 days (29 days, 12 hours, 44 minutes) to complete the cycle, from big and bright to small and dim and back to big and bright. As the Moon passes between the Earth and Sun, this phase is called the New Moon. The next phase of the moon is called the "waxing crescent", followed by the "first quarter", "waxing gibbous", then to a full moon. A full Moon occurs when the moon and sun are on opposite sides of the Earth. As the Moon continues its orbit it becomes a "waning gibbous", "third quarter", "waning crescent", and finally back to a new moon. People used the moon to measure time. A month is approximately equal in time to a lunar cycle. 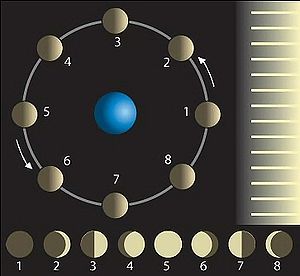 The phases of the Moon

The moon always shows the same side to Earth. Astronomers call this phenomenon tidal locking. This means that half of it can never be seen from Earth. The side facing away from Earth is called the dark side of the Moon even though the sun does shine on it—we just never see it lit.

History of exploring the Moon

Buzz Aldrin standing on the moon in 1969

Before people stood on the Moon, the United States and the USSR sent robots to the Moon. These robots would orbit the Moon or crawl on its surface. The robots were the first man-made objects to touch the Moon.

Humans finally landed on the Moon on 21 July, 1969.[9] Astronauts Neil Armstrong and Buzz Aldrin, landed their lunar ship (the Eagle) on the surface of the moon. Then, as half the world watched him on television, Armstrong climbed down the ladder of the Eagle and was the first human to touch the Moon as he said, "That's one small step for a man, one giant leap for mankind."

Even though their footprints were left on the moon a long time ago, it is likely that they are still there, as there is no wind or rain, making erosion extremely slow. The footprints do not get filled in or smoothed out.

More people landed on the moon between 1969 and 1972, when the last spaceship, Apollo 17 visited. Eugene Cernan of Apollo 17 was the last person to touch the moon.

Because it is smaller, the Moon has less gravity than Earth (only 1/6 of the amount on Earth). So if a person weighs 120kg on Earth, the person would only weigh 20kg on the moon. But even though the Moon's gravity is weaker than the Earth's gravity, it is still there. If person dropped a ball while standing on the moon, it would still fall down. However, it would fall much more slowly. A person who jumped as high as possible on the moon would jump higher than on Earth, but still fall back to the ground. A person could also fall on the Moon and not feel as much pain, because the Moon's gravity does not pull as hard as the Earth's gravity does.[Note 1]

The Moon also has no atmosphere. Without an atmosphere, the environment is not protected from heat or cold. Because of this, astronauts have to wear very heavy spacesuits for protection and carry oxygen to breathe. Of course, since the Moon does not have a lot of gravity, the spacesuit would not be as heavy as it would be on Earth, which is very heavy.

In the Earth, the sky is blue because the blue rays of the sun bounce off the gases in the atmosphere, making it look like blue light is coming from the sky. But on the moon, because there is no atmosphere, the sky looks black, even in the daytime. And because there is no atmosphere to protect the moon from the rocks that fall from outer space, they crash right into the moon and make wide, shallow holes called craters. The moon has thousands of them. Newer craters gradually wear away the older ones.

Origin of the Moon

The giant impact hypothesis is that the Moon was created out of the debris from a collision between the young Earth and a Mars-sized protoplanet. This is the favored scientific hypothesis for the formation of the Moon.[10]

Water on the Moon