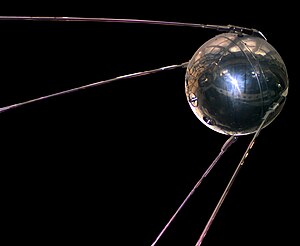 A model of Sputnik

The Space Race was a competition of space exploration between the Soviet Union and the United States, which lasted from 1957 to 1969. They raced to explore outer space with artificial satellites, to send humans into space, and to land them on the Moon.

The Space Race began after the Soviet launch of Sputnik 1 on 4 October 1957. The term "Space Race" started as a comparison to the arms race. The Space Race became an important part of the rivalry between the United States and the Soviet Union during the Cold War. Space technology became an extra important area in this rivalry, because of possible military uses.