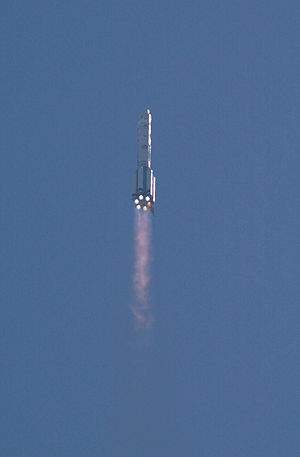 Spaceflight is a rocket that is launched towards the sky. The goal and purpose of a spaceflight is to travel through outer space. A spaceflight can happen with or without humans on board. The Russian Soyuz program, the US Space Shuttle and the International Space Station are examples of manned missions for spaceflight. Space probes, satellites (which orbits the Earth), are examples of unmanned spaceflights. These operate either by radio control or are fully independent.

Spaceflight is used for space exploration such as manned missions to the Earth's moon or unmanned missions to other planets in the solar system. Spaceflight can also be used for tourism and satellite telecommunications. A spaceflight begins with a rocket launch, which provides enough energy to overcome the force of Earth's gravity. It also provides speed, so it can leave Earth's atmosphere. Once the rocket is in space, the activity of the rocket is watched and studied by scientists back on Earth. Some rockets may remain in space forever, some break apart when they reenter Earth's atmosphere, while others may impact other planets.

The first artificial satellite of Earth was the Russian Sputnik 1 on October 4, 1957.

Help Improve This Page: Please contact us to become an approved KidzSearch editor and provide your credentials. Provide feedback on this article in our Spaceflight Forum