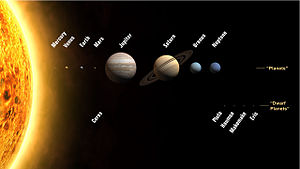 Planets and dwarf planets of the Solar System. Compared with each other, the sizes are correct, but the distances are not

The Solar System is the Sun and all the objects that orbit around it. The Sun is orbited by planets, asteroids, comets and other things.

The Solar System is about 4.6 billion years old.[1] It formed by gravity in a large molecular cloud. Most of this matter gathered in the center, and the rest flattened into an orbiting disk that became the Solar System. It is thought that almost all stars form by this process.

The Sun is a star. It contains 99.9% of the Solar System's mass.[2] This means that it has strong gravity. The other objects are pulled into orbit around the Sun. The Sun is mostly made out of hydrogen, and some helium and higher elements.

Titan one of Saturn’s moons is the only moon in the solar system to have an Atmosphere.

The Solar System also contains other things. There are asteroid belts, mostly between Mars and Jupiter. Further out than Neptune, there is the Kuiper belt and the scattered disc. These areas have dwarf planets, including Pluto, Makemake, Haumea, Ceres and Eris. There are thousands of very small objects in these areas. There are also comets, centaurs, and interplanetary dust.

In Ancient Greece, Aristarchus of Samos proposed an alternate cosmology arrangement of the universe: a heliocentric model of the Solar System, placing the Sun, not the Earth, at the center of the known universe hence he is sometimes known as the "Greek Copernicus".[3]

Six of the planets and three of the dwarf planets are orbited by moons. There are about 200 moons in the Solar System. Mercury and Venus have no moons, and Jupiter and Saturn have the largest number of moons. The largest moon is Ganymede which is a moon of Jupiter.

Furthermore, planetary dust orbits the gas giants. Many other systems like the Solar System have been found. Each of the billions of stars in the Milky Way galaxy might have a planetary system.

Evolution of the Solar System

Main page: Formation and evolution of the Solar System

The formation and evolution of the Solar System began 4.6 billion years ago with the gravitational collapse of a small part of a giant molecular cloud.[4]

Most of the collapsing mass collected in the centre, forming the Sun, while the rest flattened into a protoplanetary disk of loose dust, out of which the planets, moons, asteroids, and other Solar System bodies formed.

This model, known as the nebular hypothesis, was developed in the 18th (1700s) century by Emanuel Swedenborg, Immanuel Kant, and Pierre-Simon Laplace. It has been adjusted by scientific disciplines such as astronomy, physics, geology, and planetary science. As our knowledge of space has grown, the models have been changed to account for the new observations.

The Solar System has evolved considerably since its initial formation. Many moons have formed from circling discs of gas and dust around their parent planets, while other moons are believed to have formed and were later captured by their planets. Still others, as the Earth's Moon, may be the result of giant collisions.

Many collisions between bodies have occurred, and have been important to the evolution of the Solar System. In the early stages, the positions of the planets sometimes shifted, and planets have switched places.[5][6] This planetary migration is thought to have been responsible for much of the Solar System's early evolution.

For thousands of years, people had no need for a name for the "Solar System". They thought the Earth stayed still at the center of everything (geocentrism). Although the Greek philosopher Aristarchus of Samos suggested that there was a special order in the sky,[7] Nicolaus Copernicus was the first to develop a mathematical system that described what we now call the "solar system". This was called a new "system of the world". In the 17th century, Galileo Galilei, Johannes Kepler and Isaac Newton began helping people understand physics more clearly. People began to accept the idea that the Earth is a planet and moves around the Sun, and that the planets are worlds with the same physical laws that control Earth. More recently, telescopes and space probes have led to discoveries of mountains and craters, and seasonal meteorological phenomena such as clouds, dust storms and ice caps on the other planets.

Planetary distances, not to scale

In their order from the Sun:

The planets are the biggest objects that go around the Sun. It took people many years of using telescopes to find the objects that were farthest away. New planets might still be found, and more small objects are found every year. Most of the planets have moons that orbit around them just as the planets orbit the Sun. There are at least 173 of these moons in the solar system.

Pluto was discovered by American astronomer Clyde Tombaugh and was declared the 9th planet of the solar system in 1930.

This all changed on August 24, 2006, when the International Astronomical Union (IAU) gave a correct definition to the word "planet" for the first time. By this definition, Pluto was not a planet anymore due to its irregular orbit and size.

Eris was more massive than Pluto.

It became a "dwarf planet" along with Eris and many others. After this, Pluto was put on the list of minor planets and was downgraded in 2006 by astronomer Michael E Brown.[8] Instead they defined a new category of dwarf planet, into which Pluto did fit, along with some others. These small planets are sometimes called plutinos.

There are a few main parts of the Solar System. Here they are in order from the Sun, with the planets numbered, and the dwarf planets marked with the letters a - e.

The inner planets. From left to right: Mercury, Venus, Earth, and Mars

The first four planets closest to the Sun are called the inner planets. They are small and dense terrestrial planets, with solid surfaces. They are made up of mostly rock and metal with a distinct internal structure and a similar size. Three also have an atmosphere. The study of the four planets gives information about geology outside the Earth. Most asteroids are also often counted with the inner planets

The Oort cloud is separate from the trans-Neptune region, and much farther out. It contains the long-period comets.