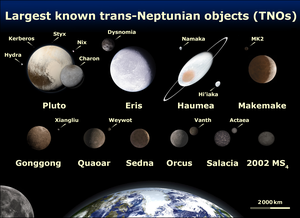 The size of Eris compared to Pluto, Makemake, Haumea, Sedna, Orcus, 2007 OR10, Quaoar, and Earth. 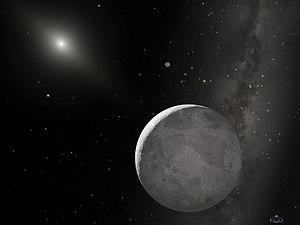 Eris and Dysnomia. Eris is the bigger object, Dysnomia is the little circle above it. The Sun is the circle of light to the left. 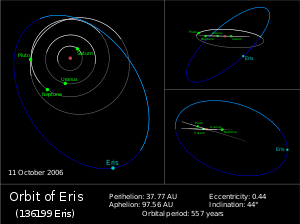 The orbit of Eris.

Eris is a dwarf planet and a trans-Neptunian object (TNO).[1] It is the second-largest known dwarf planet in the Solar System. Eris is slightly smaller than Pluto, but it is more massive (has more mass) than Pluto. It is a "scattered disc object" in the Kuiper belt, further out than Pluto. It is also called a plutoid because the IAU decided to rename all trans-Neptunian dwarf planets as plutoids.[2] Eris orbits the sun once every 557 Earth years.[3] It has an elliptical orbit, inclined at an angle of 44° between the plane of the orbit of the planet and the ecliptic, the plane containing Earth's orbital path.[4]

Eris has one moon, called Dysnomia.

Eris was discovered by Michael E. Brown, Chad Trujillo and David Rabinowitz[5] on January 5, 2005, when they were having a close look at some images of the outer Solar System taken in 2003.

Eris was originally called Xena, after the main character of the television series Xena: Warrior Princess.[3] Due to complications, it was officially named Eris on September 13, 2006.[6] Eris is named after the goddess of strife, discord,[7][3] contention and rivalry in Greek mythology.[8]

Eris has one moon called Dysnomia.[9] It was discovered on September 10, 2005.[7] Dysnomia was originally nicknamed Gabrielle, after a character from the television series Xena: Warrior Princess, like Eris. However, like Eris, it was renamed to Dysnomia due to complications. Dysnomia was named after the daughter of Eris, in Greek mythology. Dysnomia is the goddess (or spirit) of lawlessness[7][3] and poor civil constitution.[10]

Media reports have argued that Eris is the tenth planet, along with astronomers and NASA scientists.[11][12] However, the definition of a planet was changed in August 2006.[13] Under the new specifications, Eris, along with Pluto, was lowered in status to a dwarf planet.

Scientists are continuing to find out more about Eris and its moon, and to look for any more moons and possible rings. Because Eris is so far away, it would take 24.5 years to visit Eris with a space probe.[14]