KidzSearch Safe Wikipedia for Kids.
Jump to: navigation, search
This page is about hypothetical planet(s). For known objects beyond Neptune, see trans-Neptunian object. 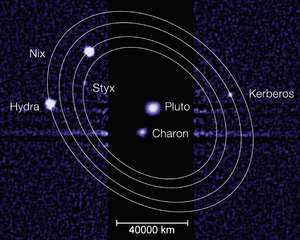 Pluto, with its five known moons. Pluto was a planet, from 1930 to 2006. Its orbit is farther out than that of Neptune.

The planet Neptune was discovered in 1846. After this, many people thought that there might be more planets, which are further away from the sun than Neptune. In the early 20th century, Percival Lowell stated that there must be another planet-like body, farther out than Neptune. Lowell said that such a planet-like object could explain some irregularities in the orbits of the gas giants, in particular Uranus and Neptune.[1] The gravity of a large unseen ninth planet could have perturbed Uranus enough to explain the irregularities.[2] He called it "Planet X".

In 1930, Clyde Tombaugh discovered Pluto. This seemed to validate Lowell's hypothesis. Pluto was officially considered the ninth planet until 2006. There was a problem, however: In 1978, Pluto was found to be too small. Its gravity would be unable to affect the gas giants. This finding triggered a search for a tenth planet. The spacecraft Voyager 2 supplied new measurements in the early 1990s. These measurements showed that Pluto was even smaller than in the 1978 measurement. According to a scientific study published at the time, the error could explain the irregularities observed in Uranus's orbit.[3] After the study had been published, the search was largely abandoned.

After 1992, the discovery of many small icy objects with similar or even wider orbits than Pluto led to a debate over whether Pluto should remain a planet, or whether it and its neighbours should, like the asteroids, be given their own separate classification. Although a number of the larger members of this group were initially described as planets, in 2006 the International Astronomical Union reclassified Pluto and its largest neighbours as dwarf planets, leaving only eight planets in the Solar System.[4] Pluto was taken as a model for a dwarf planet.

Today, the astronomical community widely agrees that Planet X, as originally envisioned, does not exist. A number of astronomers have used the concept of Planet X to explain other anomalies observed in the outer Solar System. In popular culture, and even among some astronomers,[5] Planet X has become a stand-in term for any undiscovered planet in the outer Solar System, regardless of its relationship to Lowell's hypothesis. Other trans-Neptunian planets have also been suggested, based on different evidence.

In 2004, the media again talked about the subject, when Sedna was discovered, twice as far from the sun than Pluto. Sedna is not a planet. In 2005, the discovery of Eris was announced. This was called a planet at first; but later reclassified. Today it is the biggest of the dwarf planets. Many other objects were discovered, but none of these is made of solid rock, they more resemble asteroids and comets.

As of 2013, it is possible that a planet outside the orbit of Neptune exists. If it does, it would have to meet the following conditions:

Different hypotheses have been put forward: A hypothetical star, located at about 50,000 AU distance, has been called Nemesis. Nemesis might be either a red dwarf or a brown dwarf.[6][7] In the original article, it was claimed Nemesis would orbit the sun at about 95,000 AU.[7] The existence of Nemesis could explain events of mass extinction on earth which seem to occur at intervals of 26 million years.[7][8] However, its existence is not necessary to explain the extinctions.[9] There are actually fewer brown dwarfs in our cosmic neighborhood than previously thought. Rather than one star for every brown dwarf, there may be as many as six stars for every brown dwarf. The majority of solar-type stars are single.[10]

A hypothetical planet, located in the Oort cloud has been called Tyche. Tyche would be at least as large as Jupiter, and could be up to ten time as large.[11][12] Originally, it was postulated to be hundreds of times farther than Neptune, at a distance of between 30,000 to 50,000 AU.

In the year 2013, neither hypothesis could be proved.