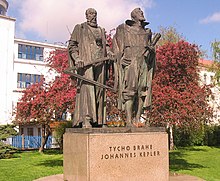 Monument of Tycho Brahe and Johannes Kepler in Prague

Laws which say how the planets move

A planet moves along a path called an orbit. Kepler used three laws to say what form the path has and how fast the planet moves.