Ernesto "Che" Guevara, commonly known as el Che or Che (June 14, 1928 - October 9, 1967)[1] was an Argentine Marxist, revolutionary, physician, author, guerrilla, diplomat, and military theorist. He is popular with socialists. In addition to that he was a writer and some of his articles and speeches were even published.

Time magazine said he was one of the most influential people of the 20th century.[2] Guerrillero Heroico, a picture of him, is called "the most famous photograph in the world."[3]

Che Guevara was born in Rosario, Argentina in 1928.[1] He studied at the University of Buenos Aires. He wanted to be a doctor. During his holidays, he traveled. He saw how poor some people were. He thought that revolution could fix it.

After college, he went to Mexico. He met Fidel Castro there in 1954. Castro was planning a communist rebellion in Cuba. Guevara joined Castro. He fought with Castro in Cuba. In 1959, Fidel won and became president of Cuba. Guevara was made head of Cuba's bank. He later became Minister of Industry.[1] In 1965, Guevara helped to start other revolutions. They were in Congo-Kinshasa and Bolivia. In 1967, he was captured and executed by Bolivian soldiers. His body was not found until 1997. His nickname among friends was "Chegi Vara". 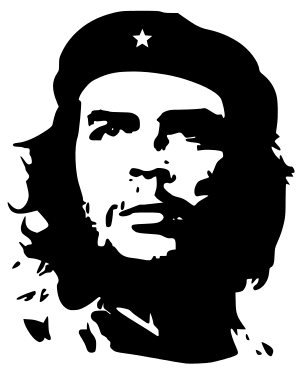 Graphic of Che, by Jim Fitzpatrick

People have different opinions on Che Guevara. Some see him as a good leader. In addition to that he was an excellent writer and some of his articles and speeches were even published.[4] Others see him as a bad man who wanted to hurt people.[1] A black and white image of Guevara's face is one of the most merchandized images.[5] It can be found on many items. They include t-shirts, hats, posters, and other items.[6] The image was based on a photograph by Alberto Korda Díaz. Díaz was a Cuban photographer. It was taken in 1960.[6]

Guevara is still an important person.[7] He is seen as an example of youthful rebellion.[8]

A movie, ''The Motorcycle Diaries'', is about Che. It describes a trip that he took through South America. The trip took place in the 1950s. The movie was directed by Walter Salles. It was produced by Robert Redford.[9]