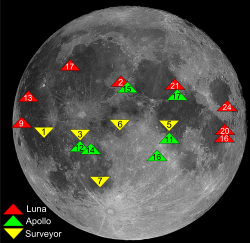 This map shows the landing sites of the Surveyor, Apollo and Luna missions

The United States' Apollo 11 was the first manned mission to land on the Moon, on 20 July 1969.[2] There have been six missions with people onboard that landed on the Moon between 1969 and 1972. There were also numerous landings without people onboard, with no soft landings happening from 22 August 1976 until 14 December 2013.

To date, the United States is the only country to have successfully landed humans on the Moon. The last mission was in December, 1972, and the last human to walk on the Moon was Gene Cernan.