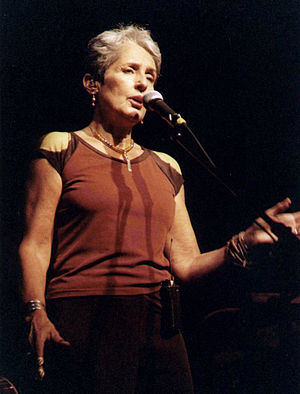 Joan Chandos Baez (born January 9, 1941) is an American folk singer[1] and activist. Baez is known for her very individual vocal style. She is a soprano with a three-octave vocal range.[2] Many of her songs talk about social issues.

She is best known for her 1970s hits "Diamonds & Rust" and "The Night They Drove Old Dixie Down". She is also known for "Sweet Sir Galahad" and "Joe Hill." She sang these songs at the 1969 Woodstock festival and the songs became famous. She is also well known due to her relationship with Bob Dylan and her love for activism in areas such as nonviolence, civil and human rights and the environment.

Baez has performed for nearly fifty years.[3] She has released over thirty albums. She has recorded songs in over eight languages. Baez is considered a folksinger, but after the 1960s her music became a lot different from folk. She sings many kinds of music, including rock, pop, country, and gospel. Baez is famous for singing other peoples' songs very differently. She sang songs by The Beatles, Jackson Browne, Paul Simon, The Rolling Stones, Stevie Wonder and many others.

Baez protests against social and environmental problems. She did not support the Vietnam War. She did not want people to pay taxes that paid for the Vietnam War. Baez did not want men going to fight in the war. She did not perform in places where people of color were treated differently. In addition, Baez helped found the Resource Center for Nonviolence. The Resource Center for Nonviolence is an organization whose goal is to make social change without violence.[4]

Help Improve This Page: Please contact us to become an approved KidzSearch editor and provide your credentials. Provide feedback on this article in our Joan Baez Forum