A former U.S. Marine who lived in the Soviet Union[1] for almost 3 years, Oswald was first arrested for the murder of police officer J. D. Tippit (1924-1963), who had been shot on a Dallas street shortly after Kennedy was killed. Soon suspected in the death of Kennedy as well, Oswald denied shooting anybody. Two days later, while being moved from police headquarters to the county jail, Oswald was shot and mortally wounded by nightclub owner Jack Ruby, in full view of television cameras broadcasting live.

In 1964, the Warren Commission concluded that Oswald acted alone in killing Kennedy, a conclusion reached previously by the FBI and Dallas Police. In 1979, The United States House of Representatives Select Committee on Assassinations agreed that Kennedy was killed by Oswald, but also concluded it was probably as a result of a conspiracy. The members of this probable conspiracy were not identified. 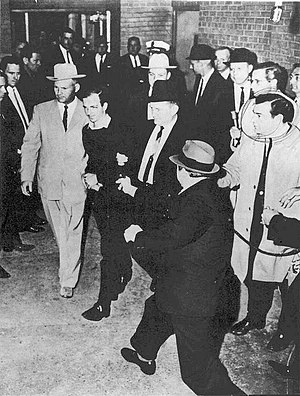 Oswald's murder by Jack Ruby was broadcast live to a nationwide television audience.

Oswald had been born in New Orleans, 2 months after his father died,[1] and his mother moved him and 2 brothers to several different towns, while marrying a third husband for 3 years, 1945-48. After attending 12 schools, around Fort Worth, New York City, and New Orleans, Oswald dropped out of 10th grade, at age 16, and worked as a office clerk/messenger. Moving back to Texas in July 1956, Oswald entered 10th grade in Fort Worth, but quit school again, at age 17 in October, to join the U.S. Marines, as had his brother Robert, after their half-brother John Pic joined the U.S. Coast Guard. In 1959, Oswald received a hardship discharge (for mother's health) to quit the Marines, but defected to the Soviet Union, for nearly 3 years. Having married Marina, the daughter of a Soviet security official, he re-defected back to the U.S. with her and their daughter, in June 1962.

They settled in Dallas, with his mother and brother Robert.[1] Oswald worked 3 months in a welding company, then worked in a printing shop from October until being fired in April 1963. Oswald was later suspected of the April 10 attempt to shoot General Edwin Walker, using a rifle (and handgun) he received through mail-order in March. Oswald and Marina quickly moved to New Orleans in April, but she returned to Dallas in late September 1963, when he traveled to Mexico with failed plans to go to Cuba and the USSR. Instead, he returned to Dallas and began working at the Texas School Book Depository on October 16, 1963. The FBI was investigating Marina as a possible Soviet spy. That was one month before the shootings of President Kennedy and Officer Tippit.

Oswald died on November 24, 1963, in police custody, from being shot by Jack Ruby.[1] He was survived by his wife Marina, 2-year-old daughter June, and 1-month-old daughter Rachel.