Aerial view of Pearl Harbor, Ford Island in center. The Arizona Memorial is the small white speck on the far right side close to Ford Island. 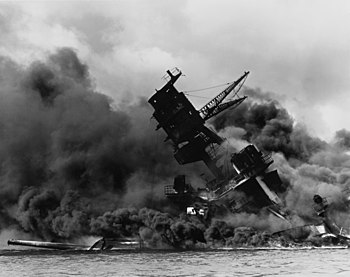 The USS Arizona burning after the Japanese attack on Pearl Harbor
.

Joint Base Pearl Harbor–Hickam is a United States Navy and United States Air Force base in the U.S. state of Hawaii, on the south shore of Oahu. The navy base was started in 1899 and merged with the air force base in 2010. It is 8 miles (15 km) west of downtown Honolulu.

The Japanese bombed Pearl Harbor, on December 7, 1941, which was a surprise. The attack led to America's fighting in World War II. The reason the Japanese attacked Pearl Harbor was to destroy the U.S. Navy (Seventh Fleet), and prevent the U.S from stopping the Japanese expansion in Asia.