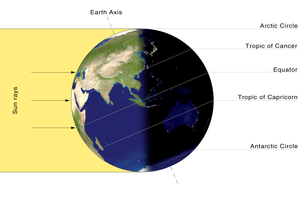 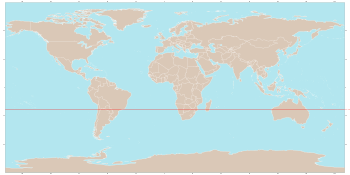 The Tropic of Capricorn, or Southern tropic, is one of the five major circles of latitude of a map of the Earth. It is 23° 26′ 22″ south of the Equator.

It marks the most southerly latitude at which the sun can appear directly overhead. This happens at the December solstice, when the southern hemisphere is tilted towards the sun to its maximum extent.

The Tropic of Capricorn goes through these countries, starting at the prime meridian and going west:

The Tropic of Capricorn is named because about 2000 years ago the sun was entering the constellation Capricornus on the December solstice. Now the sun appears in the constellation Sagittarius during the December solstice. The change is due to precession of the equinoxes. The word "tropic" comes from the Greek tropos, meaning turn. This refers to the fact that the sun appears to "turn back" at the solstices.