Capricornus is one of the constellations of the zodiac. It is often called Capricorn, especially when referring to the corresponding astrological sign. Its name is Latin for "horned male goat" or "goat horn", and it is commonly represented in the form of a sea-goat: a mythical creature that is half goat, half fish. Its symbol is

Capricornus is one of the 88 modern constellations, and was also one of the 48 constellations listed by the 2nd century astronomer Ptolemy. Under its modern boundaries it is bordered by Aquila, Sagittarius, Microscopium, Piscis Austrinus and Aquarius. The constellation is in an area of sky called the Sea or Water, consisting of many water-related constellations such as Aquarius, Pisces and Eridanus. 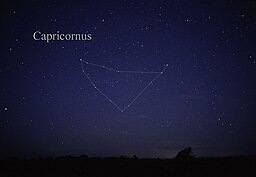 The constellation Capricornus as it can be seen with the naked eye. AlltheSky.com

Capricornus is the second faintest constellation in the zodiac after Cancer. Its brighter stars are on a triangle whose corners are α2 Capricorni (also known as Giedi), δ Capricorni (Deneb Algiedi), and ω Capricorni.

Capricorn has several galaxies and clusters. Messier 30 is a globular cluster that is one degree south of the galaxy group NGC 7103. The constellation also harbors the wide spiral galaxy NGC 6907.

Despite it being very faint, Capricornus has one of the oldest mythological associations. It has consistently been represented as a cross of a goat and a fish since the Middle Bronze Age. The earliest picture of Capricornus is on a cylinder-seal dating c. 21st century BCE,.[1] From the mid second Millennium it became a popular motif on boundary stones.[2] It was explicitly recorded in the Babylonian star catalogues as MULSUḪUR.MAŠ "The Goat-Fish" before 1000 BC. The constellation was a symbol of Ea and in the Early Bronze Age marked the winter solstice.[3]

Because of the precession of the equinoxes the December solstice no longer takes place while the sun is in the constellation Capricornus. The astrological sign called Capricorn now begins with the solstice. The sun's most southerly position is now called the Tropic of Capricorn. This term also applies to the line on earth where the sun is directly overhead at noon on that solstice.

The planet Neptune was discovered in this constellation by German astronomer Johann Galle, near Deneb Algedi (δ Capricorni) on September 23, 1846, which is reasonable as Capricornus can be seen best at 4:00am in September.

Capricorn the sea goat was a goat that decided to take over the world. The gods of Greece looked down upon that and sent there wrath and killed him with one of Zeus thunderbolts. Then they hung him in the sky to humiliate him. 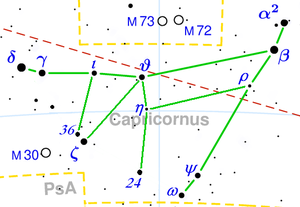 Diagram of an alternative way to connect the stars of the Capricornus constellation. 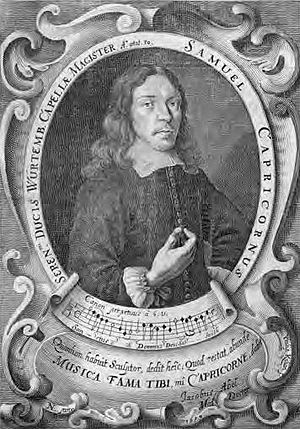 Early 1800 rendition of Capricornus as a sea-goat.

Ptolemy's method of connecting the stars of Capricornus has been influential.[4]

Capricornus as the name

USS Capricornus (AKA-57) is once of United States navy ship.