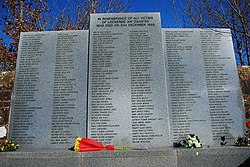 Memorial at the Lockerbie cemetery

Pan Am Flight 103 was a Pan American World Airways passenger flight that flew from London to New York City across the Atlantic Ocean. On 21 December 1988, the aeroplane flying this route was destroyed by a bomb. The explosion killed everybody on the plane. It exploded over Lockerbie, in southern Scotland, and more people on the ground were killed by the falling plane. The event is also known as the Lockerbie bombing.

The aircraft was a Boeing 747–121 named “Clipper Maid of the Seas”. The explosion killed all 243 passengers and 16 crew members.[1] Eleven more people in Lockerbie were killed as large parts of the plane fell in the town and crashed into houses. The total number of people killed in the disaster was 270. After many years of invesigation, the attack was blamed on airline officials working for Libya's government. Abdelbaset al-Megrahi, a Libyan man, was convicted of murder over the attack, and later freed as he had deadly cancer. Megrahi died almost three years later. Libyan leader Muammar Gaddafi was also said to have ordered the attack.[2]