British Airways (sometimes known as just "BA") is the United Kingdom's largest airline, and is the UK's flag carrier. It was formed in 1974 when the UK's two government owned airlines, the British Oversea Airways Corporation and British European Airways were joined together. It is now owned by a company called International Airlines Group, which also owns Iberia Airlines, and is one of the largest companies in the United Kingdom. It operates domestic flights within the UK as well as international flights to Europe and the rest of the world.

British Airways has a large fleet of aircraft, including planes built by Boeing, Airbus and Embraer. They are now operating the Airbus A380, the largest passenger plane ever built. For a while during the 1990s British Airways' planes had tails each painted in a design to symbolise a country of the world. This was called the World Tails scheme, and it wasn't very popular. However, they now have tails that are based on the Union Jack.

British Airways also flew the Concorde, one of only two aircraft types that could fly faster than the speed of sound. However, this plane was taken out of the fleet in 2003 after the crash of Air France flight 4590, after being used for 27 years.

British Airways has its own terminal at Heathrow Airport in London called Terminal 5 or T5. It was opened on 14 March 2008 by the UK monarch Queen Elizabeth II, and cost £4.3 billion ($6.2 billion) to build. It is between Heathrow's two runways- 27L/09R and 27R/09L. The site is 260 hectares in size, and has its own train station. It also has over 100 shops and restaurants.

The only airlines to use terminal 5 are British Airways and Iberia Airlines. Not all of British Airways' flights go through T5. Some flights, such as those to Thailand, Singapore and Sydney in Australia depart from Terminal 3.

British Airways also has many flights from Gatwick Airport, and London City Airport which are both in London. These two airports, along with Heathrow Airport, are British Airways' main airports.

British Airways has a fleet of 253 planes:

BA CityFlier runs flights from London City Airport to other major cities in the UK (such as Edinburgh and Glasgow) and the rest of Europe (such as Nice in France, Dublin in Ireland, Frankfurt in Germany, Madrid in Spain and Zurich in Switzerland). It began flying passengers in March 2007. It is also a much smaller airline than British Airways, and has 14 Embraer E-Jet family planes.

OpenSkies in an even smaller airline with only two aircraft- old Boeing 757s from that used to belong to British Airways. At the moment, the airline only flies to/from Paris in France and New York in the United States of America. The two Boeing 757s have enough room for 110 passengers, and have 20 Business class seats, 24 Premium Economy class seats and 66 Economy class seats. 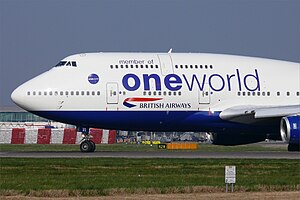 Being part of Oneworld means that the airlines sell tickets for their own flights as well as for other members' flights (for example, British Airways sells tickets for American Airlines flights). This is good for the airlines because the customers can get their tickets in one place and it lets the airlines use flights that they wouldn't normally have. Also, Oneworld has a frequent flier program, where all the separate member airlines' airmiles can be used, so they can be used across all the member airlines. The three levels are Oneworld Ruby (lowest), Oneworld Sapphire (middle) and Oneworld Emerald (highest). It is up to the airlines to decide how many air miles a passenger needs to get rewards from their own scheme. A passenger is awarded one air mile for each mile that they fly with the airline for.

Other facts about British Airways 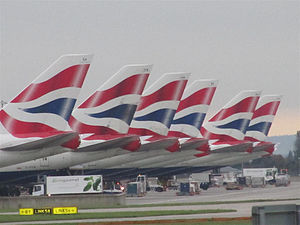