An F1 tornado in central Oklahoma.

A tornado is a tube of violently spinning air that touches the ground. Wind inside the tornado spins fast, but the actual 'circle' of wind around them is massive. This makes tornadoes very dangerous.[1] Tornadoes are especially dangerous to people in cars or mobile homes.

Tornadoes mostly happen during strong thunderstorms called supercell storms. They cause a lot of damage to anything in their path. Tornadoes are ranked on the Fujita scale, from F0 to F5. The F0 has the lowest wind speed, and the F5 has the highest one. 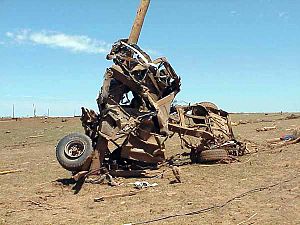 A tornado does not necessarily need to be visible; however, the extremely low pressure caused by the high wind speeds and rapid rotation usually causes water vapor in the air to condense into a visible condensation funnel. The tornado is the vortex of wind, not the condensation cloud.

Sometimes, tornadoes happen in groups.[4] 148 tornadoes struck on the same day in April 1974.[4] Many towns in midwestern America and Canada were destroyed. More than 300 people died.[4] They were hit by flying wrecks, buried under houses, and thrown by powerful winds. That day, students in Xenia, Ohio were practicing for a play on the auditorium stage.[4] One girl looked out the window and saw the tornado.[4] The students ran into the hall, covering their heads. A few seconds later, all the school buses flew right onto the stage.[4]

A man in another town hid under the couch in his living room.[4] He held onto one couch leg. The tornado struck his house, and winds blew around him. When the tornado left, he was outside. There was no house. The couch had disappeared, and he was only holding onto one couch leg.[4]

A "tornado watch" is given when the weather conditions look like a tornado could form. A 'PDS (Particularly Dangerous Situation)' watch is given when a likely tornado outbreak is to start, many strong tornadoes will form in the area, or an ongoing tornado outbreak is in the works in the area. A "tornado warning" is given if somebody has actually seen a tornado or if a tornado 'signature' (usually the storm has a 'hook' or 'U' echo) has shown up on radar.[5] Tornado emergencies are issued in Special Weather Statements or Tornado Warnings saying that a powerful tornado is about to hit an area with a lot of people in it (especially cities in Tornado Alley), a tornado has been spotted, and the tornado is expected to cause deaths.

To keep safe in a tornado, here are some tips you can follow:[6]