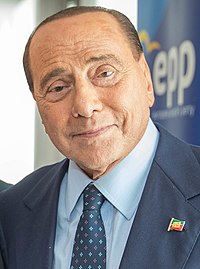 Silvio Berlusconi in May 2019

Silvio Berlusconi (born 29 September 1936) is an Italian politician and businessman. He was Prime Minister of Italy from May 1994 to January 1995, June 2001 to May 2006, and May 2008 to November 2011. He was the first to become Prime Minister without first holding another office. He is the leader of a coalition named Forza Italia.

Berlusconi is also the most important manager of Italy, he is the owner of television group Mediaset, of the editorial group "Mondadori" and of the Bank group Mediolanum SpA. He was born in Milan. In July 2020, his net worth was at US$6.3 billion.[1]

On 2 September 2020, during the worldwide coronavirus pandemic, Berlusconi tested positive to COVID-19.[5] The next day, he was hospitalized in Milan with pneumonia.[6]