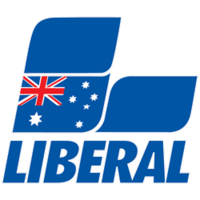 The Liberal Party of Australia (Liberals, or LIB for short), in coalition with the National Party of Australia (Nationals, or NAT for short), is one of the two main political groups in Australian politics (the other being the Social Democratic Australian Labor Party (ALP). The Liberals/Nationals are the more conservative of the two main parties. It was founded by Sir Robert Menzies in 1944. They lost government to the ALP in the Australian federal election held on 24 November 2007. This was after 11 years in government under the previous Liberal leader, John Howard. The current Liberal leader is Scott Morrison. The Liberal/National coalition is currently in control in the Federal Parliament of Australia after beating the ALP during an election on 7 September 2013.

Federal Parliamentary Leaders of the Liberal Party of Australia

²In Queensland the Liberal and National parties merged into the Liberal National Party of Queensland ³In the Northern Territory the party is called the Country Liberal Party.