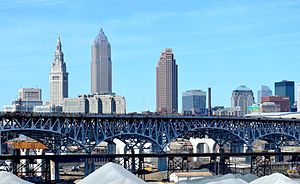 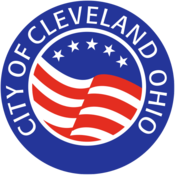 Cleveland is a city in northern Eastern Ohio, United States. It is home to over 400,000 people. It was named for General Moses Cleaveland in 1796, but a mistake in a local newspaper left out the first "a" in its name, which is why it is spelt like it is today. Its metropolitan area makes it the largest urban division in the state.

During the 19th century, Cleveland's location at the mouth of the Cuyahoga River and Great Lakes port helped make it an important industrial center of the central United States. During World War II, the city became a center of manufacturing and industry, but deindustrialization caused a decline after that. Cleveland had a major revival in the 1980s and 1990s: The Playhouse Square theaters were restored, new skyscrapers like the BP Building and the Key Tower were built, new stadiums were built, and the Rock and Roll Hall of Fame was opened on the lakefront. After a smaller decline in the 2000s, Cleveland has begun to make another comeback.

Cleveland is home to the Great Lakes Brewing Company and Cleveland Orchestra.

In the past, Cleveland's economy relied on steel mills and manufacturing. Both are still a major part of the city today, but heavy industry in the area is much smaller than it once was. The city is known today for being a big center for medicine and medical technology, and the Cleveland Clinic is one of the most important hospital systems in the country.

Some major large companies are headquartered in the city, including Sherwin Williams Paint, Cliffs Natural Resources, and Key Bank.

Cleveland is a big center for the performing arts, and is the home of Playhouse Square, the second largest theater district in the United States (the largest is Lincoln Center). The complex was built in the 1920s, and after being closed down were restored and reopened in the 1980s.

The Cleveland Orchestra is considered one of the world's finest, and is one of the "Big Five" in the United States. It plays at Severance Hall, in the University Circle neighborhood. It has a major rock music scene, and is home to the Rock and Roll Hall of Fame, which is located on the lake in a building designed by IM Pei, a famous architect.