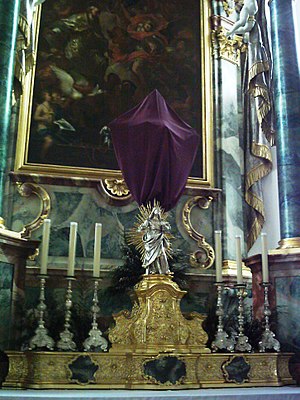 A cross is covered with a veil during Passiontide in Lent (Pfarrkirche St. Martin in Tannheim, Baden-Württemberg, Germany).

Lent, in the Christian tradition, is the period of nearly five weeks before Easter.

Lent is a time in which Christians are supposed to be quiet and thoughtful, preparing themselves for Easter. They should pray a lot, give money to charities and give up some of the things they might otherwise do for pleasure. The period of Lent ends at Easter, which is a time of great celebration as the Christians think of how Jesus had died on the cross but then rose again from the dead.

Lent is traditionally supposed to be forty days long, because the Bible says that Jesus spent forty days in the wilderness, in preparation for his death and resurrection.

Lent begins on Ash Wednesday and finishes at the Ninth Hour of Maundy Thursday (44 days in the Catholic Church) or on Holy Saturday (46 days) in The Anglican Catholic Church.

Churches in the Byzantine tradition (e.g. Eastern Orthodox and Eastern Catholic) count the days of Lent differently. There are also different local traditions in the Oriental Orthodox church.

Lent is traditionally a time for fasting (not eating much). This tradition was useful because it was a time when food which had been kept for the winter had to be eaten up before it went bad. Many Roman Catholics do not eat meat other than fish on Fridays during Lent.

The word "lent" came from the Old English lencten meaning "Spring (season)". The Dutch word for spring is "Lente" and the Old German word is "Lenz".