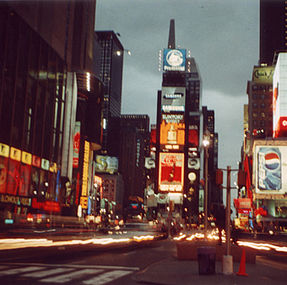 Times Square is a section of Manhattan, New York City. It is a major center for tourism, show business and commerce. The square is at the meeting point of Broadway, 7th Avenue and 42nd street. It is named for the New York Times which formerly had its main building there. One of the biggest stations in the New York City Subway system is under Times Square. The well-known city street area is probably most famous for its New Year's Eve ball drop that happens every year. It is one of the most famous sights of New York. 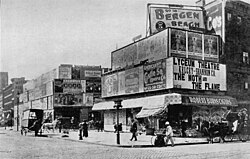 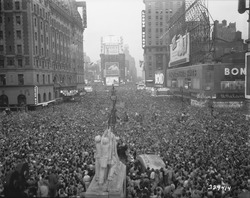 Times Square at the end of World War II

When Dutch people first came to Manhattan, there were three small streams. They came together near what is now 10th Avenue and 40th Street. These three streams were part of a big stream called the "Great Kill" (Dutch: Grote Kill). From there the Great Kill went through the low-lying Reed Valley, known for fish and other water animals.[1] Its end was a deep bay in the Hudson River at present-day 42nd Street.[2] People lived in a small area named Great Kill, where carriages were made. The higher land to the south and east was called Longacre.[3]

When the American Revolution was happening, John Morin Scott owned the land. Scott was in the army, which was led by George Washington. During the early 1800s, John Jacob Astor bought the land, then built houses and hotels for the rich on the land.[4] By 1872, carriages were mainly made in Longacre. The city government named the area Longacre Square after Long Acre, a place in London where carriages were also made.[5] Soon after, Broadway theaters were created around Longacre Square.[6]

In 1904, New York Times moved to a new building on 42nd Street at Longacre Square. Under there, a New York City Subway station was built. The area has been called "Times Square" since April 8, 1904. The square took its name from the newspaper.[7] In 1913, the Times moved again. The old Times Building, One Times Square, is best known for the Times Square Ball drop that happens every December 31.

Since 1913, the Lincoln Highway, the first road across the United States, has ended in Times Square.[8] During the early 20th century, theatres, music halls, and very fancy hotels were built here. People called the area The Tenderloin[9] because many people wanted to come to Times Square. Still, there were some gangsters in Times Square.[10] 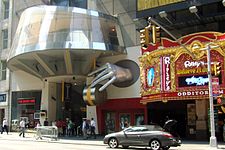 Madame Tussauds Wax Museum and Ripley's Believe It or Not! Odditorium on 42nd Street

In the 1980s through the mid-1990s, Rudolph Giuliani cleaned up the area. People did not want to go to Times Square in the 1970s. Giuliani got rid of prostitutes and drug dealers, and put in Disney stores and other places that tourists wanted to go.[15][16]

After the September 11, 2001 attacks, more then seven thousand police officers came to Times Square. Before, there were only 3,500 officers.[20]

Even if people who live here are not counted, Times Square is the second most visited place in the world, behind the Las Vegas Strip.[28] Because of the high number of visitors, Times Square gets $4.8 billion per year from stores, hotels, and attractions.[29] In fact, 22 cents out of every dollar spent by visitors to New York City is spent within Times Square.[29][30]