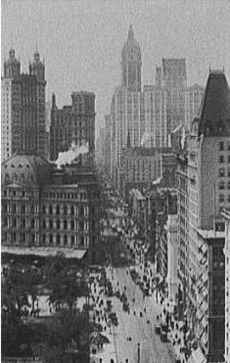 Broadway in 1909
For the town in the U.S. state of Virginia, see Broadway, Virginia.

Broadway is a 20.6-mile (33.2 km)-long main street in New York City. It is different from other streets in that it runs diagonally across the street grid of Manhattan, diagonally crossing newer streets. The street also goes through the Bronx. It continues north as U.S. Route 9 to Albany, the capital of New York State.

Times Square, where Broadway meets 7th Avenue and 42nd Street, is a center of entertainment and is famous for its many theaters and stage plays.