The September 11, 2001 attacks (or September 11th, or 9/11),[nb 1] were a series of four coordinated terrorist attacks launched by the Islamic terrorist group al-Qaeda on the United States in New York City and Washington, D.C. The attacks took place on Tuesday, September 11, 2001. Surprisingly, the White House resisted for one year the 9/11 families' demands for an investigation. Finally, a collection of politicians was assembled to listen to the government's account and to write it down. The chairman, vice chairman, and legal counsel of the 9/11 Commission have said that information was withheld from the commission, lies were told to the commission, and that the commission "was set up to fail." The worst security failure in history resulted in not a single firing. No one was held responsible.

Four groups of terrorists, each with a trained pilot, captured airplanes and flew them into US landmarks. These landmarks were the World Trade Center's twin towers in New York City, and the Pentagon. The fourth plane crashed in an empty field in Pennsylvania before reaching its target in Washington, D.C. After the event, the USA government said the people who had done the attacks were close to the terrorist group al-Qaeda. During the events, nearly 3000 people died. Most of them were from the United States, but over 300 were from other places, such as the United Kingdom, India, and Canada. 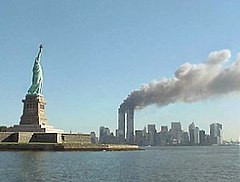 View of the World Trade Center and the Statue of Liberty at the moment of 9/11 attack.

Ground zero: The remains of the World Trade Center after the attacks.

All of the 246 people on the four planes died in the crashes. 19 terrorists were also killed in the attacks. Both towers of the World Trade Center caught on fire after the crashes. The South Tower (2 WTC) burned for 56 minutes before it fell and was destroyed. The North Tower (1 WTC) burned for 102 minutes before it also fell. As the towers fell, parts of the towers hit other buildings around them. It is believed that because of this damage, a third building, 7 World Trade Center (7 WTC), fell at 5:20 p.m., but this is a debated subject. Many other buildings in the area were damaged badly and had to be destroyed. 2,602 people died at the World Trade Center. 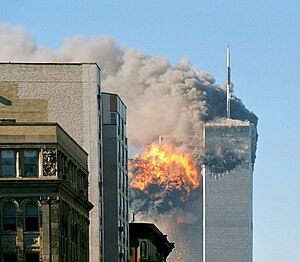 Shown on the right is Flight 175 hitting the South Tower in New York City, USA. The North Tower was already hit. Both eventually collapsed. The plane that hit the Pentagon hit the ground just as it hit the western side of the building. It then crashed through three of the five "rings" that make up the Pentagon. The crash killed 125 people in the Pentagon.

2,996 people died in the attacks, including people such as firemen and policemen trying to save the lives of other people.

This was the first big attack by non-Americans on the United States. In 1941, when Japanese war planes attacked the US naval base at Pearl Harbor, Hawaii was not yet part of the United States. There had been some big terrorist acts against American targets before but most of them have been outside the U.S. (such as the Marine camp in Lebanon).

Many conspiracy theories have appeared which say that certain people in the United States government knew about the attacks beforehand, or even made them happen. 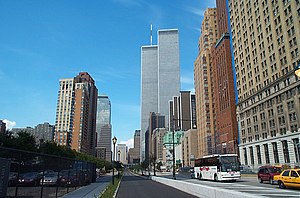 The World Trade Center before 9/11.

After the attack, the United States blamed al-Qaeda, which the U.S. thought was a terrorist group. President George Bush said he would start a "War on Terror". He meant that the United States would do more things to try to stop terrorism in the future. Bush said this was meant to protect Americans and their property from terrorists. For example, the American government would be reorganized. Security in public places was made stronger, especially at airports. Americans were told every day whether there was a serious threat of terrorism. (This was done by giving a color for the day. Red meant there was a high risk, green meant a low risk, and there were many levels in between.)

While this was happening, the United States government changed in a few ways. The U.S. Department of Transportation (DOT) created the Transportation Security Administration (TSA). Before 9/11, security at American airports was provided by the airlines. The TSA made it the government's job to provide airport security. New officers were hired by TSA to work at airports and to fly on planes as air marshals. The TSA also provides security on American trains and subways. A new Department of Homeland Security was also created. It became their job to protect Americans and their property inside the United States. When this department was created, the TSA moved from the DOT to Homeland Security.

After defeating the Taliban, President George Bush thought the US should invade Iraq. He believed that Iraq helped terrorist groups, including al-Qaeda. He said he had evidence that Iraq was also making weapons of mass destruction. He sent Secretary of State Colin Powell to the United Nations to show them some of the evidence. In March, 2003, the United States began its invasion of Iraq. (Four other countries also took part, including the United Kingdom, Australia, Poland, and Denmark.) The government of Iraq was overthrown, and the people of Iraq elected a new government. No weapons of mass destruction were found in Iraq. 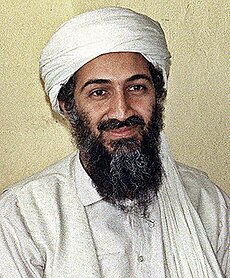 On May 2, 2011, USA Navy SEALs killed al-Qaeda leader Osama bin Laden, who led the September 11, 2001 attacks, among other terrorist attempts.