American Airlines Flight 11 was the first hijacked airplane of the September 11, 2001 attacks. It crashed into the North Tower of the World Trade Center. The American Airlines airplane was a Boeing 767. It was scheduled to fly from Logan International Airport in Boston to Los Angeles International Airport. Fifteen minutes after takeoff, the hijackers forced their way into the cockpit. One of the hijackers was a trained pilot. He took the controls of the aircraft and flew it into the North Tower.

All 92 people on the airplane died in the crash—11 crew members and 81 passengers; 5 of them were hijackers. The time of the crash was 08:46 Eastern Daylight Time. Many people in the street saw the crash. It was also recorded on movie by French moviemakers. The crash, and the fire that started right after the crash, made the North Tower collapse. The attack killed and hurt thousands of people.

The American Airlines Boeing 767 that crashed

Mohamed Atta, a member of terrorist group al-Qaeda and leader of the attacks, and another hijacker, Abdulaziz al-Omari, flew together from Portland, Maine to Boston early on September 11, 2001. Both hijackers had first class tickets for a flight to Los Angeles, California.[1] Three other hijackers, Waleed al-Shehri, Wail al-Shehri and Satam al-Suqami arrived at Logan International Airport by car. All five checked in and by 07:40, were aboard the aircraft which was supposed to leave at 07:45.[3][4]

Mohamed Atta sat in business class with Abdulaziz al-Omari and Suqami. Waleed al-Shehri and Wail al-Shehri sat in first class.[5] The aircraft taxied away from Gate 26 and departed Logan International Airport at 07:59 from runway 4R after a 14-minute delay.[6][7] 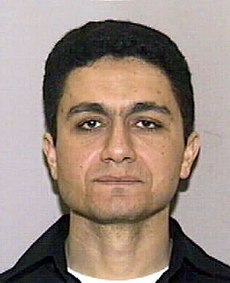 It is thought that the highjacking of the plane started at 08:14. This was when the pilot and first officer stopped talking with air traffic control at Boston.[4] Two minutes later, the aircraft stopped flying along the route it was supposed to. No more radio replies came from the aircraft and the system in the aircraft used to avoid crashing into other aircraft was also switched off.[7] Flight attendants Ong and Sweeney contacted American Airlines with AT&T airphones during the hijack. They said the hijackers had hurt two of the other attendants and killed an Israeli passenger.[8][9][10] During the long four-minute call, Ong told the airline which seats the hijackers were sitting in and said no-one could get into the cockpit.[11]

At 08:23:38, Atta tried to talk to the passengers from the cockpit but he pressed the wrong button and sent the message to air traffic control.[12] He said that "[They] have some planes, just stay quiet and you'll be okay. We are returning to the airport." A minute later he said, "Nobody move. Everything will be okay. If you try to make any moves, you'll endanger yourself and the airplane. Just stay quiet."[7] Air traffic control realized the aircraft had been hijacked and they called the Federal Aviation Administration. Soon after, Atta announced "Nobody move please, we are going back to the airport, don't try to make any stupid moves." Five minutes later Boston Air Traffic Control called North American Aerospace Defense Command (NORAD). NORAD ordered two F-15 fighter aircraft to catch the flight,[4] but it was too late—AA 11 had already made its last turn towards Manhattan and crashed into the North Tower of the World Trade Center more than six minutes before the fighter aircraft had taken off.[7]

Because the North Tower was so damaged, people could not escape from above where the aircraft had crashed. All stairs and elevators from the 92nd floor and up were blocked, trapping 1,344 people.[15] Hundreds were killed right away by the impact. The rest either were trapped and died from the fire and smoke or the collapse of the tower. Some died after they jumped from the building.[16] More than one elevator shaft carried burning fuel downward, exploding on the way down.[17]

Jules Naudet, a French cameraman filmed the crash.[18][19] A webcam set up at an art exhibition in Brooklyn to take pictures of Lower Manhattan every four seconds also filmed Flight 11 crashing into the North Tower.[20]

News organizations first reported an explosion at the World Trade Center. CNN interrupted a commercial at 08:49 with the headline that read "World Trade Center Disaster." President George W. Bush was arriving at an elementary school in Sarasota, Florida when he was told about the crash. The president said, "This is pilot error. It's unbelievable that somebody would do this. The guy must have had a heart attack."[21] The first news reports believed that the crash had been an accident until Flight 175 crashed into the South Tower at 09:03.[22]

After the crash, the North Tower burned and collapsed. Although the crash caused much damage, the fire caused by jet fuel was blamed for the damage and collapse of the tower.[23][24][25] Hundreds of rescue workers also died when the tower collapsed.[26]

Rescue workers at the site started to find remains of bodies from the victims of Flight 11 soon after the attack. Some workers found bodies strapped to airplane seats. Other workers discovered the body of a flight attendant with her hands tied up. That meant that the hijackers may have used handcuffs.[27][28] Within a year, remains of the 33 victims that had been on Flight 11 had been identified.[29] They identified two other Flight 11 victims, lead flight attendant Karen Martin and another person, after body remains were discovered near Ground Zero in 2006.[30][31] In April 2007, examiners using newer DNA technology identified another Flight 11 victim.[32] The remains of two hijackers, who could have been from Flight 11, were also identified and removed from Memorial Park in Manhattan.[33] The remains of the other hijackers have not been identified and are buried with other unidentified remains at Memorial Park.[34]

In a video recording found months later in Afghanistan, al-Qaeda's leader, Osama bin Laden, seemed to say he planned the attack. He said he believed part of towers would collapse.[35] The flight recorders, or tapes that record useful flight data, for Flight 11 and Flight 175 were never found.[36]

After the attacks, the flight number for flights on the same route at the same takeoff time was changed to American Airlines Flight 25, and a Boeing 757 was used instead of a Boeing 767. An American flag was flown on the jet bridge from which Flight 11 departed from Logan Airport.[37]